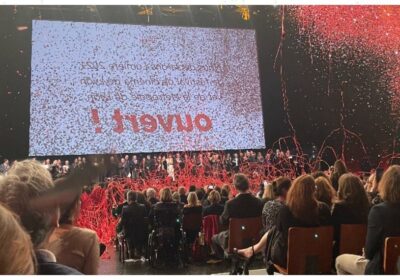 The festival, which unfolds in the birthplace of the Cinematograph and its creators, the Lumière brothers, is dedicating its 13th edition to its long-time president Bertrand Tavernier, the beloved filmmaker who recently died.

During his opening speech, the usually voluble Frémaux had to take a moment to regain his composure as he paid an emotional tribute to Tavernier, his friend and close collaborator, with whom he worked side by side for nearly four decades at the Lumière Institute.

“Bertrand has left us with an heritage that is so major and so immense, and your presence here tonight proves that the adventure will go on,” said Fremaux before a crowd of 5000 in the Tony Garnier concert hall.

“That was always the spirit of the festival,” says Tavernier, referring to the Lumière festival’s ambition to bring together wide-ranging audiences and enjoy the collective experience of moviegoing.

While Netflix was once again MIA at Cannes due to the festival’s rule requiring competition titles to open in French theaters, the streamer is out in force at the Lumiere festival. Netflix has four films playing there, including Campion’s “The Power of The Dog,” Sorrentino’s “The Hand of God,” and Gyllenhaal’s “The Lost Daughter” which world premiered at Venice.

The presence of Sarandos, who made the trip especially to Lyon for the opening, underscores the friendly relationship between Fremaux and Netflix and hints at a potential comeback of the streamer at Cannes.

Staying just 24 hours in Lyon, Sarandos took the time to visit its Cinéfabrique film school, that offers a free three-year program to students from diverse backgrounds.

A special tribute was also paid to Jean-Paul Belmondo, who attended the festival several times, including in 2013 when Lumière laureate Quentin Tarantino paid tribute to the Nouvelle Vague icon with these words: “Even the name Belmondo is not just the name of a movie star, not just the name of a man, it’s a verb that represents vitality, charisma, the force of will. It represents super-coolness.”

“>The new president of the festival and Institut Lumière set up by Tavernier, actress Irène Jacob, took to the stage and regaled the audience in a duo with French actor and director Alain Chabat with a rendition of “La chanson d’Hélène”, the famous song by French composer Philippe Sarde (which he wrote for Claude Sautet’s 1970 “The Things of Life”), who is being honored at Lumière this year.

Among the guests was also French actor and director Edouard Baer, who will present his upcoming film “Adieu Paris!” along with lead actors, Belgium’s Benoit Poelvoorde and François Damiens, who amused the audience as they tried to tame the rowdy line-up of celebrities at the end of the ceremony as read out the traditional opening sentence all together.

The ceremony was followed by the screening of a 4K digital version of Edward Sedgwick’s 1928 silent movie “The Cameraman” starring Buster Keaton and Marceline Day, long believed to be lost, and restored by the Criterion Collection, the Cineteca di Bologna and Warner Bros. The film was accompanied on the piano by French composer Vincent Delerm – a perfect way to open what is recognized as one of the leading heritage film festivals in the world.

Speaking at the opening diner after the screening, with oysters, frogs legs and local delicacies on the menu in the city known as France’s gastronomic capital, British film critic Peter Bradshaw described Lumière as the “shangri-la”: “It’s this amazing treat, where you get to go and see wonderful restored movies and eat wonderful food. It’s not like Cannes, Venice or Sundance: Lyon offers something different.” Asked what that is, he enthused: “History, the culture of cinema. There may be premieres, but they are often built into a retrospective, as we see with Jane Campion this year.”

While its growing influence on the film industry is undeniable, Lumière remains first and foremost true to its motto “un festival pour tous” – a festival for all – filling cinema theaters at sold-out screenings already on Day One.

The Lumière film festival runs until the 17th of October.