Home » TV & Movies » The Yorkshire Vet: How old are Mr and Mrs Green?

The Yorkshire Vet: How old are Mr and Mrs Green? 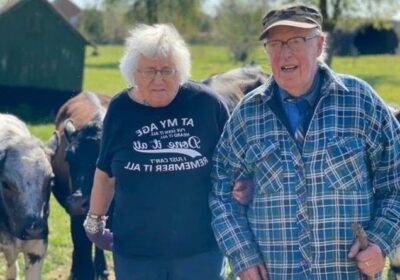 The Yorkshire Vet continues tonight, Tuesday, July 13, for another exciting episode on Channel 5. Despite leaving Skeldale Veterinary Centre, Peter Wright remains part of the cast, helping poorly farm animals whenever he can. One of his frequent clients who have become stars of the show are married farmers Mr and Mrs Green.

How old are Mr and Mrs Green?

Steve and Jean Green featured earlier on in the series as they had a sick newborn calf on their hands.

This was when Peter was invited to their farm in Thirsk to try and assist the couple which he was more than happy to help with.

Jean was 27 when she first met Steve who employed her brother at the time of her asking him out on a date.

Just over three months after getting together, the loved-up pair got married and have been inseparable for 40 years.

There is an age gap between Jean and Steve who went on to have a daughter, Sarah.

While Jean is 67-years-old, husband Steve is believed to have turned 92 this year.

His 91st birthday celebrations were marked on The Yorkshire Vet in April last year as the pair were filmed suit shopping for the occasion.

Viewers were also touched when the couple decided to renew their wedding vows back in 2020.

The ceremony was held at their farm with guests sat upon bales of hay.

Steve said: “Ever since we met 40 years ago you’ve made me the happiest man in the world. You mean everything.”

In response, Jean said: “When I set eyes on you it was such a magical moment. I will love you forever.”

So it’s no surprise that Mr and Mrs Green are fan-favourites not only with audiences but with vet Peter.

The famous vet has been treating the Greens’ animals for almost four decades.

He told The Mirror: “Farm folk like Steve and Jeanie are dying out – you don’t get people like them on farms anymore.

“If everybody could lead as simple life as them the world would be a much better place.”

The Yorkshire Vet will continue this evening with a new episode airing on Channel 5.

Giving a teaser as to what fans can expect, a tweet from the official The Yorkshire Vet Twitter account reads: “Tonight, you’re going to meet Little Boss!

“He’s the bulldog we’ve been telling you about.

“This is Peter finding out what’s happened, and you honestly won’t believe what he’s hurt himself trying to do … let’s just say he really, really likes hedgehogs!”

The Yorkshire Vet is available to watch on Channel 5.