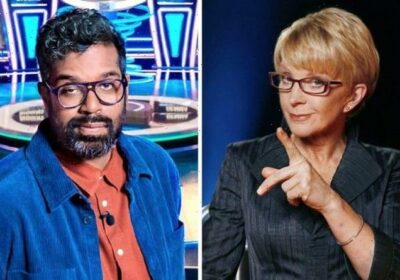 A revamped edition of The Weakest Link will arrive on screens next week, and plenty of celebrities will be taking on comedian Romesh Ranganathan for the grand prize. Previously helmed by stone-cold presenter Anne Robinson, the new host revealed he didn’t take inspiration from his predecessor’s quizzing techniques when he took over the BBC One classic.

Anne took on hosting duties for 12 years since its debut in 2000.

After staying off-air for nearly a decade, it was announced comedian Romesh will challenge 12 teams of celebrities in a revived version of the series.

Although Anne’s icy demeanour and frequent jabs at the contestants have become iconic, the new quiz host will be taking the series in a new direction.

“There are certain things that Anne did that were textbook her,” he explained.

Best known for frequent appearances on comedy panel shows and hosting a number of his own series, Romesh opened up to Express.co.uk and other press about taking on the new role.

He explained the series will be taking on a slightly different feel now he’s in charge.

“Anne was amazing at it, and she was a big reason why that show was so popular in the way that she did it,” Romesh continued.

“But I don’t think any good can come from trying to emulate that or be like that.”

The Weakest Link became one of the most popular quiz shows in the UK thanks to Anne’s acerbic hosting style.

She would frequently take shots at members of the public and celebrity quizzers, and was even criticised for taking the insults too far at times.

The presenter also became infamous for the withering delivery of her catchphrase, “You are the Weakest Link… Goodbye!”

While all these elements catapulted the show to success, Romesh maintained he’ll be his usual grumpy and sarcastic self.

He continued: “I think the way that we talked about it was just for me to do it in my own way.

“The fact of the matter is the format is bulletproof, the quiz is amazing, so if you’re into the quiz you’ll get The Weakest Link.

Romesh also assured fans he’s come up with his own version of the show’s classic catchphrase, though they’ll have to tune in to find out.

“We did develop… there’s a new thing that I say,” he said.

“But I don’t want to reveal it now, I want you to see it on the show.”

He then joked: “It’s a 16 bar rap. It takes up quite a long time on the show and they said we had to lose a round to fit it in, but I think it’s worth it!”

The revamped Weakest Link will kick things off with a Strictly special as the perfect chaser for the ballroom show’s highly anticipated grand final next weekend.

The Weakest Link starts on Saturday 18th December at 6.10pm on BBC One.