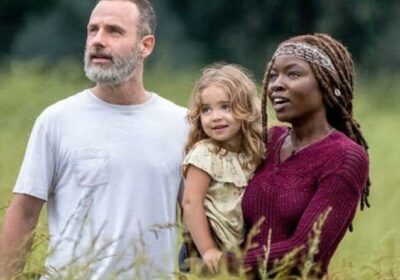 After his shocking departure from The Walking Dead in season nine, AMC audiences were unsatisfied with the hero’s dramatic departure. However, the latest promo for the 11th and final season has hinted at his return as Andrew Lincoln’s character was heard delivering one of his most famous speeches in the trailer.

The Walking Dead, based on the Robert Kirkman comic book series of the same name, has dominated television screens since its debut in 2010.

When it was announced the upcoming 11th season, due in 2022, would be its last, many fans were left wondering what the future will hold for the series’ most popular characters.

The show’s former leader and tortured protagonist Rick Grimes made a shocking exit midway through season nine and actor Lincoln has left an indelible mark on the series.

However, despite friends and family believing him to be dead, the latest promo suggests that the character could make a shocking reappearance in the final season.

The recently released trailer took a trip down memory lane as many deceased characters were seen in an emotional montage.

Rick delivers one of his famous speeches in the video, telling his family: “How we live. How we die. What we’re willing to do, who we are. We’re the reason we’re still here, not me.

“We stick together. I know we’ll be okay. Because this is how we survive. We tell ourselves that we are the walking dead.”

Rick’s presence and what he taught the zombie-killing group is still felt in the series even though he is presumed dead by everyone he knew.

Does the trailer mean that the former sheriff will make a return sometime before the series ends?

After all, the show’s former protagonist taking centre stage in what will be the final ever promo for the drama seems rather loaded.

In a voiceover by some of The Walking Dead’s most famous and beloved characters, each of the current cast members can be heard saying: “No matter what we’ve faced or who we’ve lost. No matter where we’ve been or where we’re going.

“Whatever happens. We finish together.”

However, the montage of the characters ends with Rick, leading fans to believe that he could be returning very soon.

The films will follow Rick’s adventures after the events of the ninth season episode, titled What Comes After.

Fans last saw Rick being airlifted to parts unknown with his family believing he had died in a horrific explosion.

Speculation has been rife as to whether Rick would ever see his family or friends again, and how the films will tie into the popular series.

Lincoln has previously given fans hope that he could once again return for the show’s final season, telling SFX Magazine: “Never say never.”

The show’s current showrunner Angela Kang stated in 2019 that, “the door is always open” for Rick’s, sure to be epic, return.”

Giving fans hope, she added: “Lincoln can come back any time.”

Lincoln also discussed the show’s longevity, adding: “It’s an extraordinary feat that they’re still going and making this beautiful and groundbreaking show that still resonates with the world.”

Fans will have to wait patiently to see if Lincoln’s return to the series ever transpires but, if he does, will audiences see the cowboy-hat-wearing hero first on TV or cinema screens?

The final season of The Walking Dead will be released on August 22 on AMC in the US.