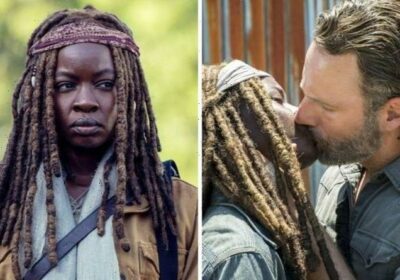 A brand new teaser trailer has been released online for the midseason finale of The Walking Dead, which will be available early on AMC+. As episodes also roll out on STAR via Disney+, the new clip may have confirmed the return of Michonne (played by Danai Gurira) in episode eight, ‘For Blood’.

Fans are convinced they’ve spotted the striking silhouette of Michonne in a recent teaser trailer for The Walking Dead season 11.

AMC’s long-running zombie drama has split its final season into three parts, with the last episodes of Part One set to air over the coming weeks.

With the midseason finale coming up a week early on AMC+ this Sunday, a potentially spoiler-filled promo has been unearthed on YouTube.

In amongst the regular walker and Reaper action, the new footage also reveals a strangely familiar figure.

Although the shadowy scene doesn’t 100 per cent confirm the newcomer’s identity, a number of viewers are convinced fan favourite Michonne will be returning for TWD’s last season.

Former series regular Danai Gurira has not yet been confirmed to be making an appearance, but her signature dreadlocks and katana seem to have given the game away.

Down in the comments, several YouTube users expressed their excitement for Michonne’s supposed return.

A fan named Wesley Smith speculated: “I know it’s not her but I swear I thought that was Michonne’s silhouette.

“Looks like a Katana in hand with walkers laying around.”

“Hold up hold up was that Michonne,” asked Gemma Dalby.

And Anthony Buerk insisted: “Yes, Michonne returns during the storm.”

“Scott Gimple already confirmed at comic con that she would return. Well… She’s Back!!!”

Unfortunately, it’s unclear whether her arrival would be coming within the series itself, or at some point in the still in-development trilogy of feature films centred on Rick.

Meanwhile, other fans suggested the trailer could simply be a ruse, and the sword-wielding figure could actually be current regular Rosita (Christian Serratos).

A user named Clarkké Peterson admitted: “As much as I want that to be Michonne 99% tells me it’s not.

“All indications are she’s not going to show up until the Rick movies. It looks a lot like Rosita, that’s who I’m betting it is, just have to wait and see.”

A release date for the upcoming movies has yet to be confirmed, so sadly it may be some time before fans see their old Walking Dead favourites again.

The Walking Dead season 11 continues Sundays on AMC and STAR on Disney+.