'The Voice': A Stunning 4-Chair Turn Pits the Coaches Against Blake 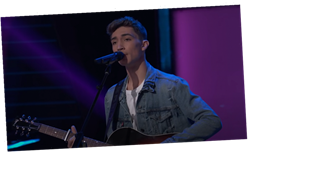 On Monday’s all-new episode, 20-year-old North Carolina native Avery Roberson wowed all four coaches with his solemn, acoustic cover of Tim McGraw’s “If You’re Reading This,” kicking off a bidding war to land his smooth baritone.

“You didn’t do what people expect people to do to get four-chair turns, which is wail everywhere and do all of those things,” Kelly Clarkson marveled, praising Avery’s tone and “storyteller vibe.” “You kept it you, and it sounded so beautiful and intimate.”

“I don’t know who you’re gonna pick. I have an inkling,” she admitted, hinting at Team Blake. “But I will tell you this: I have won this show with a male country singer. I’ve had hits in country music… I’m a fan of yours, throughout this show. I hope you do so well.”

“It’s important to have a concrete understanding of country music, because you can’t know where it’s going unless you know where it came from,” Blake said, noting that he’s the only coach on the panel who could recognize the song that Avery sang.

“Imagine if there was a pop artist who came out and we said we’re the only ones capable of coaching this person because we know pop music,” Nick Jonas fired back as he and his fellow coaches pled their case to the talented country singer.

“I know I’m not the obvious choice for a country artist, but I turned for you before any of the other coaches because I heard a beautiful, beautiful voice,” John Legend told Avery. “The tone is rich, subtle, and that’s what this show is about: finding great voices to be heard by the rest of the country. And some of them love country, but they also listen to pop or soul or blues or rock.”

“I turned for you because I love music, and I love coaching great vocalists on this show,” he added. Check out the full audition in the video below:

Ultimately, the panels best pitches didn’t quite pay off. Even though Avery was sweetly gracious as he struggled with his decision, he did ultimately stay in the country lane and pick Team Blake.

“Sometimes I feel like these coaches’ only goal is not that [the singer] choose them, but just to make sure that they don’t choose me,” Blake said, gloating just a bit. “I know Avery was feeling that pressure, but he made the right choice.”

As The Voice kicked off its 20th season, celebrating 10 years on the air, ET sat down with the coaches, who all noted that there’s still something thrilling about the show’s “captivating” blind audition process that fans love to watch.

‘The Voice’: John Legend and Kelly Clarkson on If Their Kids Will Pursue Music Careers (Exclusive)

‘The Voice’: John Legend and Kelly Clarkson on If Their Kids Will Pursue Music Careers (Exclusive)

“It’s all about the talent and not the aesthetic, right off the bat,” Kelly explained. “It’s a really interesting thing to just hear something and be moved by it and turn around and go, ‘What?!'”

In fact, the performer and talk show host shared that the Blinds for season 20 “were my favorite Blinds to shoot. Like, it was so much fun. I literally kept coming home, thinking on my drive home, ‘I can’t believe I get paid to just go and hang out and it’s really fun.'”

“We’re so fortunate we get to do what we love to do and we’re so fortunate that we have art as such as an outlet for us creatively and emotionally,” John said, also sharing his gratitude for the crew that makes their production a possibility amid the COVID-19 pandemic. “It’s not just a job, because we actually enjoy doing it. It’s fun to be around our coworkers and we get to make music with people who have dreams and are inspired and that’s exciting.”

The Voice airs Mondays at 8 p.m. PT/ET and Tuesdays at 9 p.m. PT/ET on NBC. See more from the upcoming season in the video below!

'The Voice' Season 20: Blake Shelton on How Many More Seasons He’ll Stay a Coach (Exclusive)