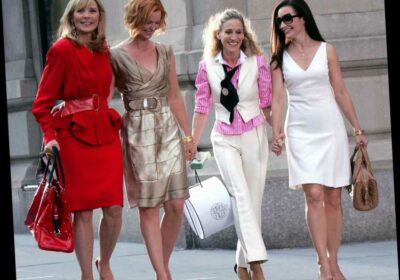 Sex and the City is coming back into our lives like a lovable zombie that simply won’t stop doing the most—and the cast is making a fortune. You know, other than Kim Cattrall, who is not participating in And Just Like That for reasons that’ll presumably be explored in an upcoming season of Ryan Murphy’s Feud.

While Sarah Jessica Parker, Kristin Davis, and Cynthia Nixon are all seemingly being paid equally for the upcoming HBO Max reboot, their salaries were wildly different for Sex and the City seasons 1-6, not to mention for the subsequent films. Here’s a ranking of who made the most money in the cast (spoiler: it’s SJP) and why their salaries fell across such an extreme range throughout the show’s run.

Sex and the City salary: Up to $3.2 million per episode

According to Variety, Sarah Jessica Parker is making “over $1 million per episode” for And Just Like That—which seems to be what the other main characters are making, as well. But the core cast of SATC didn’t always get the same slice of the pie back in the day, and by that I mean…SJP earned wayyyyyy wayyyyy WAYYYYYY more than everyone else.

Celebrity Net Worth reports that Sarah Jessica Parker earned around $50 million for the first three seasons of the HBO show, and—once she became a producer—started making $3.2 million per episode for seasons 4-6 (though The Telegraph reports a slightly lower figure). So yeah, she was certainly making a lot. Not to mention a lot more than everyone else.

Kim won’t be bringing home any income for the reboot because, well, she’s not in it, but historically she’s been the second highest-earner of the Sex and the City cast. Kim was paid $350,000 per episode during her SATC financial peak, while she took home $7 million for the first movie and $10 million for the second. This is obviously a lot less dinero than SJP, and the pay disparity between them is reportedly one of the reasons Kim refused to do a third film (and, presumably, HBO’s new show).

In 2004, Kim told Jonathan Ross that she had asked to be paid $1 million per episode if the show were to continue, saying “I felt after six years it was time for all of us to participate in the financial windfall of Sex and the City. When they didn’t seem keen on that, I thought it was time to move on.” Honestly? Fair.

Kristin is about to pocket around $10 million for And Just Like That, but her salary for the O.G. show wasn’t always so high. Celebrity Net Worth reports that she was earning $350,000 at the peak of the show (much like Kim Cattrall), while she took home “just” $2 million for the first SATC film, and managed to double that to $4 million for SATC2.

Sex and the City salary: Unknown

For reasons that remain unknown, the internet doesn’t seem to have a-n-y information about what Cynthia Nixon made playing Miranda on Sex and the City, which, RUDE. But we do know that she’s earning at least a million for the upcoming revival—and it’s probably fair to assume she made around the same as Kristin Davis for the show and the two films.

But the question remains: Why was Sarah Jessica Parker paid so much more than her costars? Answer: She’s the star of the show.

In 2018, producer/writer Michael Patrick King explained, “The show doesn’t exist if Sarah Jessica wasn’t the blond star of the show, that’s No. 1. Kim was not at the height of her career, Kristin was under her in terms of notability, Cynthia was a theater actress—and their contracts reflected that status.”