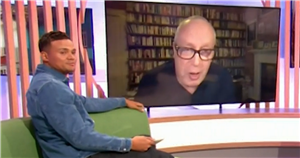 BBC's The One Show turned rather awkward when Jermaine Jenas got a big telling off from one of his own guests – a SAGE psychologist.

It comes as drivers across the UK have been hit by long queues and empty petrol pumps – meaning they have been unable to get fuel.

At the start of the show, Jermaine welcomed Stephen Reicher, a member of the SAGE sub-committee who has been advising the government on behavioural science.

However, it wasn't long before tensions arose in the studio as the scientist told Jermaine to stop using the term "panic buying" – and he looked far from happy with the presenter.

Wanting to find out how we can stop people from "panic buying" fuel at petrol garages, Jermaine asked Stephen "At what point does the panic buying start, and what can we do to stop it?"

The expert went on to explain that there are plenty of people, such as nurses and teachers, who have to fill up on fuel as they have to get to work and can't afford to lose out if everyone else is buying it.

He passionately defended key workers who need petrol, insisting that they're acting reasonably in wanting to buy fuel and aren't panicking, but instead they believe that others are scrambling for fuel due to the media using terms like "panic-buying".

He then took aim at Jermaine and the media when he said: "The problem is, everyone is speaking perfectly reasonably, they're not panicking, they're not emotional they're not out of control.

"But they believe that everybody else is panic buying because you, Jermaine, and others, are using the term a lot of times."

In awkward scenes, Jermaine then declared: "It's my fault," as he turned towards the studio.

The scientist did seem to see the funny side of his rant as he began to laugh.

He went on: "If we believe that everybody else is mad and acting irrationally, we'd be mad not to do the same as them and to actually got out and buy the petrol."

He then gave Jermaine another lashing when he raised his voice and said: "So stop saying panic buying!"