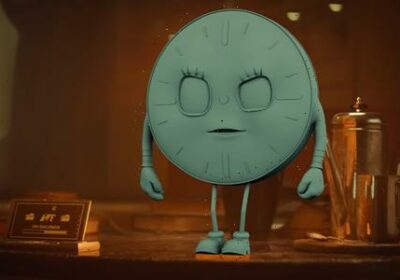 (The Morning Watch is a recurring feature that highlights a handful of noteworthy videos from around the web. They could be video essays, fan-made productions, featurettes, short films, hilarious sketches, or just anything that has to do with our favorite movies and TV shows.)

In this edition, learn the secrets behind the creation of the animated character Miss Minutes from Marvel’s Loki series. Plus, see how Ghostbusters: Afterlife actress Mckenna Grace reacts to the most recent trailer for the movie. And finally, listen as M. Night Shyamalan‘s Old star Gael García Bernal provides a career breakdown, from Y Tu Mamá También to Coco and more.

Next, Mckenna Grace may be one of the main characters in Ghostbusters: Afterlife, but there’s so much of the movie that she hasn’t seen yet. Check out how much she’s grown since shooting the movie a couple years ago in this trailer reaction from Sony Pictures, and see her excited reactions to all of the new footage from the upcoming sequel.

Finally, you can see Gael García Bernal starring in M. Night Shyamalan’s new movie Old right now. So Vanity Fair brought in the actor to take a look back at his eclectic career. From Spanish-speaking roles in Y Tu Mamá También and The Motorcycle Diaries to more mainstream projects like Mozart in the Jungle and Coco, Bernal breaks down the various characters he’s played over the years.