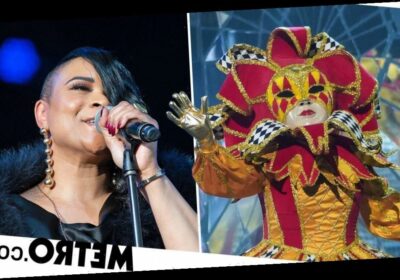 The first contestant has performed during week two of The Masked Singer UK – and fans are convinced it’s singer Gabrielle in disguise.

During the second week of the competition, Harlequin is going up against Blob while Seahorse sings against Viking and Bush Baby faces Grandfather Clock.

For their first song on the show, Harlequin sang a moving rendition of Rihanna’s Diamonds, receiving a standing ovation from panellist Rita Ora as the tune drew to a close.

While there are several guesses as to who Harlequin could be, an overwhelming majority of those following the programme are of the opinion it’s none other than celebrated British singer Gabrielle.

‘Harlequin is Gabrielle. I know that voice,’ one person tweeted following The Masked Singer competitor’s performance.

‘OMG it’s Gabrielle! I used to be obsessed with her when I was kid,’ another said.

‘Look we’re all saying it’s Gabrielle right… Not much of a guessing game is it…?’ someone else wrote.

However, others noted that the clues Harlequin gave about their identity during their introductory video may not add up with it being Gabrielle behind the mask.

Last week, Alien became the first contestant to be eliminated from the competition, after landing in the bottom three with Swan and Badger.

As they removed the top part of their costume, it was revealed to be singer Sophie Ellis-Bextor underneath.

Who will be next? Stay tuned to find out!

The Masked Singer returns next weekend on ITV and will be available to watch on ITV Player.