The 'Loki' Credits May Have Accidentally Revealed a Pretty Big Spoiler 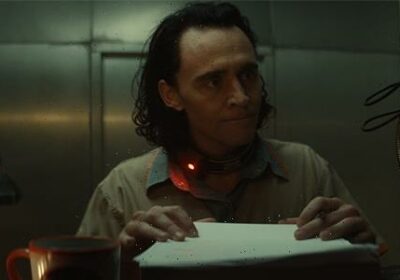 Major spoilers follow for the second episode of Loki.

The second episode of Loki dropped a pretty major bomb on us (literally and figuratively), with the reveal of the fugitive Loki Variant who is wreaking havoc across the Sacred Timeline. Our Loki Variant (Tom Hiddleston) has a pretty good idea of who this fugitive is when he comes face-to-face with them, but are they really exactly who they appear to be?

According to the credits for the international versions of the most recent Loki episode, maybe not.

What Do the Credits Say?

The second episode of Loki built up to the god of mischief coming face-to-face with the fugitive Variant of himself, who he assumed would look just like him. Wrong. The fugitive Variant turned out to be a woman, and blonde at that. Played by Sophia DiMartino, the Variant had been named as a Loki Variant by Agent Mobius (Owen Wilson), leading us to assume that this was Lady Loki, a female version of the God of Mischief who had a long history in Marvel Comics, and whose debut we’d come to expect with the revelation that Loki was gender fluid. But a discrepancy in the credits for DiMartino’s character suggests that this might not be the case.

Per an eagle-eyed Loki fan on Twitter, DiMartino is credited differently in the English-language version and the international versions of the second episode of the Marvel Disney+ show. In the English version, DiMartino is simply credited as “The Variant,” but in the Castilian Spanish version, for example, she’s credited as “Sylvie.” Which suggests she’s not Lady Loki at all, but an entirely different character.

In Marvel Comics, Sylvie Lushton is a human girl from Oklahoma who gains magical powers soon after the Asgardians settle their new Asgard in Oklahoma (it’s a long, long story, so roll with it). With her new powers, Sylvie takes on the mantle of Enchantress (a superhero identity that had been previously held by a character named Amora) and moves to New York City to join the Avengers. But unbeknownst to Sylvie, her powers had actually been given to her by Loki, who “liked the idea of creating a mortal who suspects she’s one of my kind.”

With Martino’s Variant having the same blonde hair as Sylvie (Lady Loki is typically depicted with the same dark hair as male Loki) and the comic book character’s ties to Loki, the similarities are too strong to be a total coincidence. It’s possible that this Variant is in fact Enchantress, on a vendetta against Loki and the Sacred Timeline after another version of him had meddled in her life. The casting of The Walking Dead‘s Cailey Fleming as “Young Sylvie” also lends to this theory. But what could this mean for the rest of the series?

What Could This Mean for ‘Loki’?

Lady Loki actually being Enchantress might mean there’s another Loki Variant behind everything — perhaps not pulling every string, but kicking off the events that led to Sylvie’s mission to destroy the Sacred Timeline. Or even possessing Sylvie, as we’ve seen Loki do with other female versions of Loki in the comics.

We still don’t know the identity of the character Richard E. Grant will be playing, but it’s been widely speculated that he would be playing an older version of Loki. Could the show be leading up to the reveal that Old Man Loki is behind the whole mystery, ending in a face-off where our Loki Variant must battle his older, more villainous self? We’ll have to wait to find out.

New episodes of Loki drop on Wednesdays on Disney+.