'The Hitman's Wife's Bodyguard' Gets an Earlier Release Date 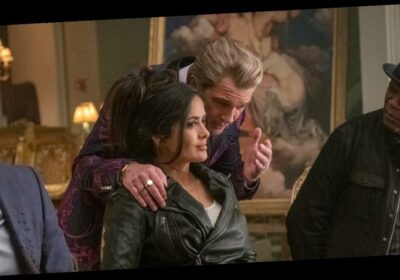 Lionsgate announced that it is moving up the Hitman’s Wife’s Bodyguard release date to June 16, 2021. It previously was set for August 20 of this year after being pushed back from 2020 due to the coronavirus (COVID-19) pandemic, but it seems that studios are growing more confident that there will be a summer movie season this year with vaccine rollout keeping steady.

Ron Schwartz, Lionsgate’s president of Worldwide Distribution, said in a statement: “This is the kind of summer action film that delivers even more comedy and more thrilling action than the first film – and it’s perfect for fans new to the franchise as well. The Hitman’s Wife’s Bodyguard is what summer moviegoing is all about – great, crowd-pleasing entertainment.”

Lionsgate also released a new image with the newly announced release date, which you can see above. It features all the stars: Ryan Reynolds, who plays the titular bodyguard; Samuel L. Jackson, who plays the husband; and Salma Hayek, who plays the wife. A silver foxed Antonio Banderas also appears as the villain.

Here is the synopsis for The Hitman’s Bodyguard’s Wife:

Patrick Hughes returns to direct The Hitman’s Bodyguard’s Wife, after helming the 2017 film to the tune of $177 million worldwide, from a script by Tom O’Connor and Phillip Murphy & Brandon Murphy, with a story by Tom O’Connor.