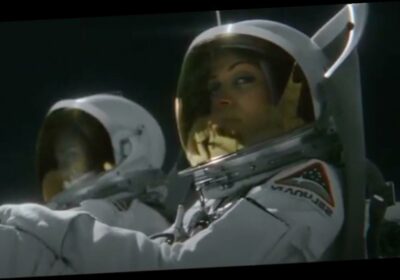 Millions of dollars can be poured into a single TV commercial, so it’s no wonder ads can often, unexpectedly, blow us away. Some can make us tear up (remember that wondrous vending machine ad that made us catch feels over Coca-Cola?) and others make us crack up (those Geico cloggers, hello?). That said, mistakes and strange details can still ensue, leaving viewers confused or laughing unintentionally.

Since the advertising industry also always tries to err on the side of caution and away from controversy (that lambasted Kendall Jenner Pepsi ad comes to mind), we sometimes end up with some commercials that are very … attentive. Sometimes too attentive, with safety warnings and disclaimers that end up being more hilarious than helpful. Case in point: Allstate’s new 30-second “Moon” ad spot. The commercial is certainly well-made and, although it may not be intentionally hysterical, it evokes a transcendent mood as it features two astronauts calmly navigating the moon’s surface in a smooth-sailing space rover. Plus, its choice to use “Cruisin,'” a super-smooth track by Smokey Robinson, doesn’t hurt. But here’s what does: the ad has a disclaimer that is making the rounds online and confusing people as to why they’re being warned against space-based reckless driving. Curious exactly what we’re talking about?

Scroll ahead to see the disclaimer in Allstate’s new commercial that is leaving people scratching their heads.

Allstate issued an interesting disclaimer in their ad

So what about Allstate’s “Moon” ad is launching … eyebrows? As the space buggy in the commercial slowly zooms from a cliff, a disclaimer comes up on the original commercial screen that says “do not attempt.” Wait, what? As in, don’t attempt driving a space rover off a cliff on the moon? Obviously, the internet erupted over this interesting, overly cautious interstellar disclaimer.

“I promise I won’t recklessly drive my lunar rover on the moon, @Allstate,” one Twitter user wrote. “Can’t stop thinking about the Allstate commercial that has astronauts driving a lunar rover on the moon and on the bottom of the screen it says ‘Please do not attempt’ WHO IS THAT FOR?!” wrote another. “Allstate driving on the moon commercial: ‘Do not attempt’ I think this is the one time the warning wasn’t necessary,” wrote a third, just noting the hilarious abundance of caution.

This Allstate gaff may not have the ramifications of, say, Peloton’s controversial self-improvement commercial from 2020, but regardless, it did make us laugh. The comments definitely got back to Allstate, too — as of the afternoon of Jan. 11, 2021, the commercial had been taken down from YouTube and replaced with a new version with no disclaimer on it. Apparently Allstate realized that we can’t, in fact, do dumb things on the moon whenever we feel like.