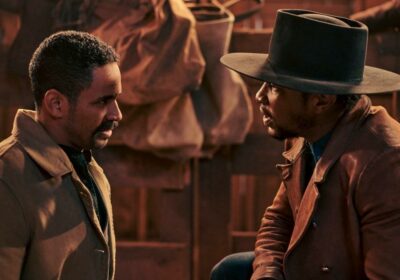 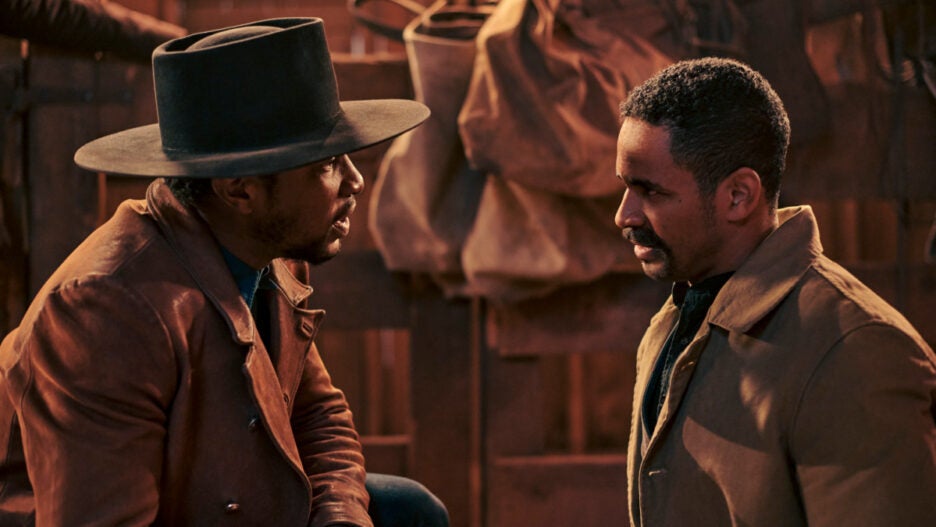 Westerns have for so long echoed each other in their physical details, story points, and mythic images that these signposts have become canonized as pleasurable truths, historical authenticity be damned. British musician-turned-filmmaker Jeymes Samuels adores those tropes, too, but with his splashy feature debut “The Harder They Fall,” he’s on a mission to correct the starkest element of the genre’s echo chamber — its abiding whiteness.

The result is a no-holds-barred shoot-em-up with an enviable cast filling out both sides of the law, albeit stacked in favor of those on the “out”-side of that line: Jonathan Majors, Idris Elba, Regina King, LaKeith Stanfield, and Zazie Beetz holstering up in rival gangs, with Delroy Lindo the sole enforcer sporting a badge. Using a story built on revenge, robbery, and real-life figures, from first minute to last Samuels gunblasts a statement of cinematic pride in showcasing those erased from a cultural timeline, from its galloping riders and pioneer towns to its plentiful showdowns. And by first minute, I mean first minute, when text lets us know that “While the events of this story are fictional … These. People. Existed.”

As a representative display of historical-but-reimagined players on well-worn ground, “The Harder They Fall” has undeniable pop, but as a movie needing character, narrative, and pacing beyond revitalized nostalgia, it’s all too often a bloody, showy mishmash that rarely holds its clichés and archetypes together with any lasting resonance. 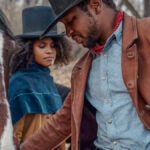 A brutal opening scene in Samuels’s and Boaz Yakin’s screenplay sets up gunslinger Rufus Buck (Elba) as one mean dude, killing a pastor and his wife with gold-plated pistols and taking a razor to the forehead of their son. That scarred kid grows to be outlaw Nat Love (Majors), whose vengeance is reignited upon learning that Rufus has been released from prison, an act shown in a lengthy, violent train sequence that also introduces Rufus’s deadly co-riders, soft-spoken fast-draw Cherokee Bill (Stanfield) and steely-eyed Treacherous Trudy (King).

Nat, meanwhile, reassembles his own gang (Edi Gathegi and RC Cyler) but centers his hopes on re-recruiting his ex, shotgun-wielding saloon-brothel owner Stagecoach Mary (Beetz). Hovering nearby is cagey lawman Bass Reeves (Lindo), who has a vested interest in how the Rufus-Nat feud plays out.

The road to that confrontation in the all-Black town of Redwood City, though, is a wildly uneven journey of scattershot humor, bloodshed, and repetitively threatening showdowns that make one long for characterization and mood devoid of menace. (It feels as if a pulled or almost-pulled gun factors into nearly every scene, like some weird inverse of Chekhov’s rule.) 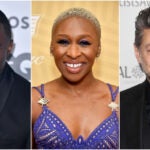 Samuels loves his actors, especially in mythic stances, but can’t envision them outside their appeal as trigger-ready grudge-holders. Cinematographer Mihai Malaimare’s regular close-ups are more monotonous than Leone-like, which leaves little room for varying widescreen framing that might deepen relationships and spaces. For boasting such a formidable cast, the movie has a perfunctory variety-pack vibe instead of one built on people making their way through a time and place.

That said, veterans Elba and Lindo know how to make the most of their valuable currency as seen-it-all badasses, while Majors is fast cementing his high-wattage appeal across many genres, and Stanfield is clearly enjoying himself. King and Beetz are both commanding, especially in costumer Antoinette Messam’s rich spectrum of frontier-wear, but one wishes their characters were more thought-out beyond symbolizing tough businesswomen who can fight. (King does get a curious childhood memory moment, but it devolves into one more reminder that everybody here is a stone-cold killer.) The most intriguing character is Danielle Deadwyler’s Cuffee, a male-presenting, trustworthy cohort of Mary whose spirited, layered support points to complexities of personality long ignored by Westerns. 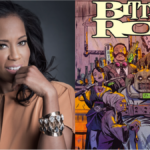 It’s also a kick to hear Samuel’s mélange of a score — reggae, Afrobeat, hip-hop — do its part to freshen up a dusty genre, even if the front-and-center music doesn’t necessarily solve the director’s problems with storytelling rhythm or thematic continuity. Showdowns and surfaces clearly matter more to him than the trajectory of a character or idea, so much so that you’ll be thinking more about the jokey audacity of a briefly visited all-white town that’s literally painted all white than the all-Black town whose imperiled future is supposed to be what’s at stake.

It’s been said one in four cowboys in the Old West were Black, and if so, “The Harder They Fall,” for all its flaws of excess, may be the kind of brash kicking open of the saloon doors needed to get more Black westerns made. But a western that’s all bravado and bullets is only one kind, so here’s hoping for a stampede of stories that shows more — forgive the pun — range.

“The Harder They Fall” premieres on Netflix Nov. 3.