Home » 'The Handmaid's Tale': O-T Fagbenle Reveals What Luke Thinks When He Looks at Baby Nichole

'The Handmaid's Tale': O-T Fagbenle Reveals What Luke Thinks When He Looks at Baby Nichole 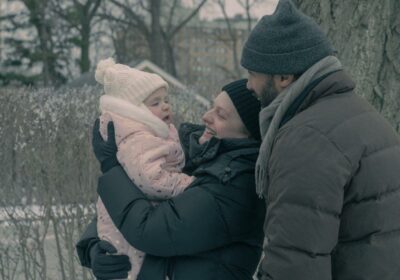 Luke Bankole (O-T Fagbenle) has been raising June Osborne’s (Elisabeth Moss) daughter Nichole since the third season of The Handmaid’s Tale. Nichole is the daughter of June and her lover in Gilead, Nick Blaine (Max Minghella).

In season 4 of The Handmaid’s Tale, June manages to escape to Canada and she reunites with Nichole, Luke, and her best friend Moira Strand (Samira Wiley), who is also raising Nichole with Luke. While Luke has become a doting surrogate father to Nichole, Fagbenle revealed that the character has insecurities about June’s relationship with Nick.

[Spoiler Alert: This article contains spoilers for season 4 episode 7 of The Handmaid’s Tale.]

At the end of the second season of The Handmaid’s Tale, June helps Nichole escape along with her friend Emily Malek (Alexis Bledel). June stays behind to try and rescue Hannah (Jordana Blake), her daughter she shares with Luke, but she is unsuccessful.

In Canada, Moira and Luke take Nichole in and raise her as if she is their own. Originally, Luke feared that Nichole was the product of rape and that Commander Fred Waterford (Joseph Fiennes) was her father.

To ease Luke’s fears, June manages to get a message to him on a cassette tape. In the message, June gives Nichole’s backstory, and admits to Luke that she fell in love with Nick, saying:

“It’s not easy to tell you this… ’cause I am ashamed. I had to build a life here. Of a sort. And you should, too. You deserve a life, a full life, Luke. You deserve love. And you’ll always have… You’ll always have mine but… I understand if you maybe need more than that. I need you to know that Nichole… She was born out of love. Her real name’s Holly. And her… Her father is a driver named Nick. You met him. He helped me to survive. I need to believe that you can forgive me. I’m not the woman you remember. She’s part of me. But I’m doing what I need to, to survive. You should, too.”

What Luke thinks about June’s relationship with Nick

When June arrives in Canada, Luke references Nichole as “our daughter,” meaning he views Nichole as his daughter that he shares with June. This causes June to give Luke a look, and while she does not say anything, she later voices her true feelings to Nichole in private.

While rocking Nichole to sleep, June tells Nichole that while Luke and Moira have been “raising” her, she and Nick are Nichole’s parents.

“Why are you so amazing? I know why. Because Luke and Moira are raising you,” June tells her daughter. “I also want you to know that your daddy and I love you so much. Your first daddy.”

Luke claiming Nichole as his daughter shows how much he has bonded with Nichole, but it also hints that he may be uncomfortable thinking about Nichole’s birth father. In an interview with TV Insider, Fagbenle seemingly confirmed this.

“Luke is adult enough to know that June had to find ways to cope and it’s been a lot of years. It hurts but he’s under no illusions about what she may have been through and what she has to deal with,” the actor said.

Fagbenle continued, “That doesn’t mean it’s not challenging. It doesn’t mean that he doesn’t sometimes look at Nichole and wonder whether or not she’ll choose [Nick] instead of Luke, but he lives in hope.”

Weeks before she escaped to Canada, June and Nick professed their love for one another in an emotional farewell. Now that June has reunited with Luke, she is attempting to acclimate to Canada, but her relationship with Luke is not smooth sailing.

In an interview with Entertainment Weekly, Fagbenle teased that Nick will disrupt June and Luke’s relationship later in the fourth season of The Handmaid’s Tale.

“His desperation to connect with June has some successes, and quite a few failures, and their relationship is really tested. Also, Nick,” Fagbenle said. “Don’t worry, Nick fans. Nick rears his tricky little face into our business.”

New episodes of The Handmaid’s Tale premiere every Wednesday on Hulu.