‘The French Dispatch’ Review: Wes Anderson Doubles Down on His Style in Endearing Journalism Salute

It’s hard to imagine another living filmmaker with a style as instantly recognizable as Wes Anderson, a feat that works against him no matter how expansive his approach. “The French Dispatch” doubles down on it, with a freewheeling triptych of stories that make the case for his appeal by amplifying it.

So much has been made about the precise frames, the vibrant colors, and the deadpan delivery of Anderson’s work, but less about the substance beneath it. Anderson’s movies may be pretty, whimsical flights of fancy, but they also express genuine curiosity about the strange nature of human relations. The people at the center of “The French Dispatch” do that, too: This charming sketchbook of stories about American expatriates in France delivers a welcome salute to storytelling as a way to make sense of the world. A freewheeling three-part salute to old-school journalism in general and The New Yorker in particular, the movie works in fits and starts, swapping narrative cohesion for charming small doses of wit and wonder about odd people and places worth your time.

The result is an endearing and liberated explosion of Andersonian aesthetics that doesn’t always cohere into a satisfying package, but never slows down long enough to lose its engrossing appeal, and always retains its purpose. Closer to a French New Wave experiment than the more controlled ensemble stories in his repertoire, “The French Dispatch” is akin to Anderson inviting audiences into his laboratory as he mines for gold from real material, and fuses it with his homegrown artistry.

While its central publication is based in the fictional French city of Ennsui-sur-Blasé and serves an audience across the globe in Kansas, there’s no doubting the inspiration behind the scenes. “The French Dispatch” closes with a dedication to everyone from William Shawn to James Baldwin and Lillian Ross, all treasured writers from The New Yorker history books whose work inspired the eccentric tales within.

As an inviting voiceover (Anjelica Huston) explains, “The French Dispatch of the Liberty, Kansas Evening Sun” took its cues for 50 years from the guidance of one Arthur Howitzer Jr. (a muted Bill Murray, playing a lightly fictionalized version of New Yorker founder Harold Ross). Over the course of the intricate triptych that follows, Anderson assembles more embellished figures from the magazine’s pages, all of whom excel at the filmmaker’s brand of understated delivery, as they make even the most practical observations sound like punchlines. In lesser hands, it might get grating, and fast, but Anderson keeps the material fresh with a zippy screenplay and his playful Russian Doll approach to narrative, not to mention the ever-striking mise-en-scene and imagery that careens from bold palettes to black-and-white and back again. Cinematographer Robert Yeoman maintains the postcard-like precision of “The Grand Budapest Hotel” with such exactitude that anyone unfamiliar with the fictional setting might mistake it for a real place. 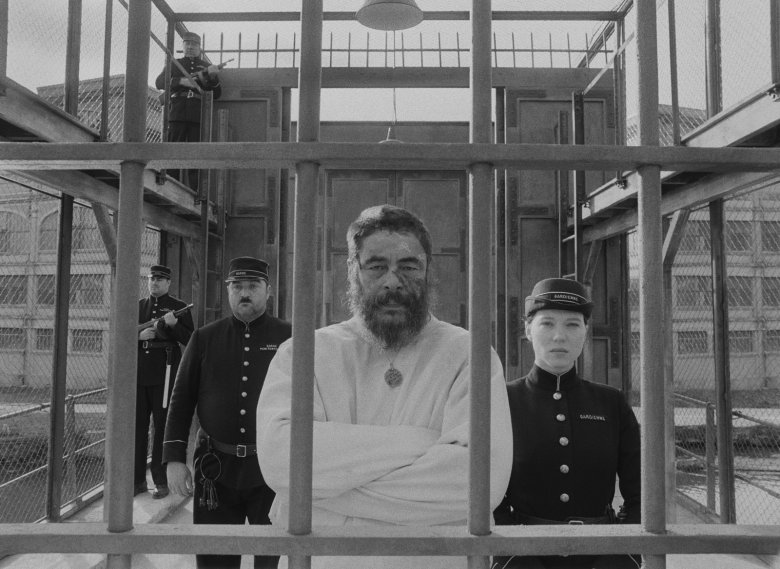 Mostly, though, “The French Dispatch” is a fun watch because it keeps reinventing itself. Each chapter gives another journalist the chance to take charge. There’s the straight-faced Lucinda Krementz (Frances McDormand), who writes about the exploits of quirky student activist Zeffirelli (a meme-worthy Timothée Chalamet), and ultimately sleeps with him before coaxing him to follow his true desires. The second, more garrulous entry follows arts reporter J.K.L. Berensen (Tilda Swinton), who recounts the peculiar romance between incarcerated painter Moses Rosenthaler (Benicio Del Toro) and prison guard Simone (Léa Seydoux), as well as the advances of a scheming art dealer (Adrien Brody). Finally, there’s Roebuck Wright (Jeffrey Wright) — an apparent blend of Baldwin and Francophilic foodie A.J. Liebling — who recites the bizarre story of a kidnapping taking place in the city to a talk show host (Liev Schreiber) while doubling back on a series of oddball tangents, with interjections from Murray’s editor for clarity.

That one’s a knockout, but “The French Dispatch” takes a lot of detours to get there. Somewhere along the way, Owen Wilson rides a bike around town for a slapstick interlude, animated sequences appear, and the cameos pile up all over the place, from Edward Norton as a police chief to Saoirse Ronan as a criminal and Christoph Waltz, apparently just hanging around. At times, the density of famous faces and circumstances gives the impression of a dizzying stunt: Anderson’s ability to corral a bunch of actors to do his bidding in a vibrant milieu has never been such an overt component of his filmmaking, and at times it threatens to undo the overall appeal.

Mostly, though, the scattershot assemblage of vignettes remain an absorbing and always quite fun ride, as Anderson makes his way from 1925 to 1975 with each story carving out a distinctive path. Among them, the Del Toro/Seydoux pairing stands out as Anderson’s most affecting love story since his 2007 short “Hotel Chevalier,” as it finds the characters enmeshed in the hilarious and touching story of a criminal man finding his purpose behind bars — and the deranged collector whose passive-aggressive advances build to a violent confrontation. Brody’s performance was inspired by Lord Duveen, the subject of a 1951 New Yorker profile by S.N. Behrman, and the character’s insistence that the prisoner must commodify his talent feels like Anderson’s way of addressing the pressures he faces as well: “All artists sell their work,” Brody insists. “That’s what makes them artists.”

But it’s the McDormand/Chalamet segment that allows Anderson to bring much grander ambitions to bear, as he maps out the story of student revolutionaries in smoke-filled bars with such overt early Godard overtones it’s a wonder he doesn’t include a reference to the children of Marx and Coca-Cola. However, he does give us Chalamet’s Zeferelli in a bizarre love triangle with an older woman and the radical French motorcyclist (Lyna Khoudri) whose ideology doesn’t quite line up with his own. The sight of the pair mounted on her bike, speeding upward through a black abyss, is one of the most lyrical, even haunting, images in Anderson’s repertoire; it evokes the constant sense of mystery and journeying to exotic destinations, both real and imagined, that often exist at the center of his work.

Still, Wright’s performance may be the strongest selling point of “The French Dispatch,” and the one that brings it all home. His stern gaze and baritone delivery capture the essence of the soul-searching that has deepened and matured in Anderson’s films over the years. Decades after “Bottle Rocket” and “Rushmore,” the filmmaker’s scope has widened many times over. Continuing a trajectory he started with “The Grand Budapest Hotel” and “Isle of Dogs,” he’s less invested in the particulars of family bonds or idiosyncratic journeymen than the way those sort of personalities feed into the larger equation of an enigmatic existence. When Bill Murray’s Arthur interrupts Roebuck’s story to clarify its intent, the moment feels like Anderson’s way of saluting the constant give-and-take necessary to make an impactful statement rather than just coloring in the lines of a pretty picture.

That’s the central tension that Anderson’s movies have always worked through. “The French Dispatch” bears some of the DNA last glimpsed in “The Life Aquatic With Steve Zissou,” another portrait of a storyteller partly drawn from real life. There, however, the protagonist was literally lost at sea; here, the storytellers find stability to their mission in communal bonds. We learn early on that the publication’s editor died in 1975, and that the French Dispatch effectively died with him; the sweet climax finds the entire staff coming together for one last assignment. On a certain level, the fate of the paper suggests that this kind of handmade approach to distinctive human experiences died long ago, and Anderson’s salute to an earlier era may also be his version of an elegy. Certainly, the precise, discursive storytelling of “The French Dispatch” is in constant peril, but the very existence of this delightful movie is proof that it hasn’t gone away yet.

“The French Dispatch” premiered in Competition at the 2021 Cannes Film Festival. Searchlight releases it on October 22, 2021.