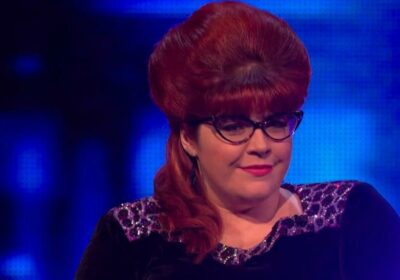 The Chase's Jenny Ryan slammed celebrity contestant Dave Johns for a mistake that fans were quick to dub as a "f*ck up" while some viewers moaned about the episode being a repeat.

Ronni Ancona, Adam Gemili, Dave Johns and Joel Dommett made up the team taking on Jenny 'The Vixen' Ryan on tonight's repeated episode of The Chase, which was originally aired in 2020.

When Dave, who has played The Chase before, stepped up to the podium to take on The Vixen – nobody thought it would end with Jenny slamming the celeb.

He managed to bag £7,000 in the first round – which left the audience applauding and overjoyed, but then The Vixen tempted him with a whopping £136,000.

Dave ended up being unable to resist the huge offer and nabbed it in an instant.

In a question asked during the round that saw him battle with Jenny for the huge six-figure sum, he was asked: "In Greek myth, what was the subject of the Judgement of Paris?"

The multiple-choice answers were as follows: A. A beauty contest, B. A running race, or C. A boar hunt.

Confused by the question Dave took his time to select an answer, while Jenny was quick on the button.

Still unable to think of the answer, he ran out of time, and when host Bradley Walsh told him he said: "I was going to put A."

He would have been correct had he have taken the plunge, but The Vixen was less than impressed by Dave's hesitation.

Annoyed by his hesitation he added: "But I just hesitated."

Shouting down from her seat she yelled: "Serious time now," in a very stern voice.

Jenny then added: "Hands out of your pockets, stand up straight," before sweetly adding: "you got this."

He then got the next question wrong, which meant he was caught by the chaser and lost the huge cash sum for the team.

While somebody today added: "It will never not annoy me when people run out of time to answer the question! That is literally your only job!"

And another penned: "Bloody clown. Not pressing the buzzer muppet #thechase."

This came as fans fumed over the rerun of the show, with one taking to Twitter to say: "Another Celebrity repeat..What happened to those family Chasers, I would rather see repeats of those. #TheChase."

Another added: "Don’t know how many times this episode has been on with that woman impressionist who looks like she’s gunna have a breakdown #thechase."