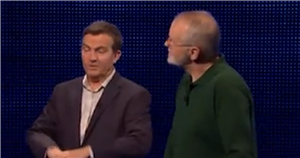 The Chase viewers were baffled by one controversial question on the hit daytime show and TV host Bradley Walsh couldn’t help but agree with them.

As the show opened, Alan stepped up to the podium to take on Anne Hegerty, otherwise known as the Governess, as the episode’s Chaser.

But one question threw both players through a loop, and it’s fair to say viewers were taken aback by the surprising question as well.

Despite this week's episode being a repeat from a few years ago, fans were left just as stumped as they were the first time the it was aired.

The famous Doctor Who companion asked the 62-year-old photographer which song has been recommended as a beat to help perform CPR, and viewers were surprised when they didn’t see one famous 80s tune.

Many fans of the show thought it was the Bee Gee’s hit track Stayin’ Alive which was released in 1977 on their album Saturday Night Fever.

But the options given were all nursery rhymes, including Nelly the Elephant, Polly Put the Kettle On and Twinkle, Twinkle, Little Star.

With little to go off of, Alan opted for Nelly the Elephant as his final answer, but a baffled Bradley Walsh agreed with viewers.

Bradley recalled: “I thought it was Stayin’ Alive by the Bee Gees. That was the one used on the telly,” and it appears he wasn't the only one who thought so.

Unable to visualise whether the nursery rhyme kept in tune with the recommended 100 beats per minute, Bradley began singing the classic song as he mimed chest compressions.

Luckily the Southport native got the question right, but fans were quick to share their opinions on the puzzling question on social media.

One user wrote: “I did first aid training over 10 years ago to the rhythm of Stayin’ Alive. Only just occurred to me ‘stayin alive – ah ha', as in stopping someone from dying.

Another asked: “When did it change from Staying Alive?” as a third agreed: “I thought it was staying Alive tbh.”

But that wasn’t the only cause of contention between Anne and the players as viewers began to notice the Governess become visibly annoyed when the team took home the grand prize.

After four rounds, the Chaser was only able to knock out one contestant from the group which unfortunately fell down to Suzanne despite earning the largest in her builder round.

But her calm composure soon fell apart in the final chase as the group correctly answered 17 questions compared to the quizmaster herself who got more than three questions wrong.

Luckily for them, the group took home a staggering £14,000 after their surprising win.

The Chase airs weekdays at 5pm on ITV