'The Challenge' Season 37 Reunion: Michele Fitzgerald Cries Over Emanuel Neagu and Tori Deal: 'I Was Mad at Tori' 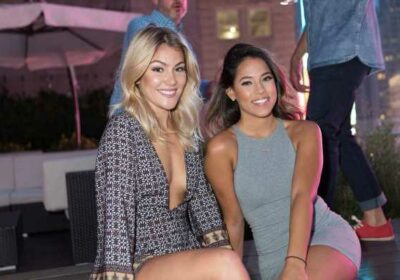 MTV’s The Challenge Season 37 reunion is finally here, and fans can’t wait to see what happens when the 14 international competitors and 14 veteran players come back together. A clip from the upcoming reunion shows rookie player Michele Fitzgerald talking about her relationship with Emanuel Neagu. And she shed a few tears when discussing what it was like watching Emanuel move on with Tori Deal. Here’s what went down.

Emanuel Neagu told both Michele Fitzgerald and Tori Deal that he loved them on ‘Spies, Lies, and Allies’

Emanuel Neagu proved to be one of the best rookies on The Challenge: Spies, Lies, and Allies. And he, Michele Fitzgerald, and Tori Deal all make appearances at The Challenge Season 37 reunion.

At the beginning of the season, Michele and Emanuel hit it off. They established a romantic relationship early on, and they bonded over their rookie status in the house. Unfortunately, Michele was sent home early on after losing an elimination. After she lost, Emanuel told Michele he loved her.

Later on, Tori and Emanuel established their romance. And Emanuel also allegedly told Tori he loved her.

“You shouted ‘I love you’ to both Michele and Tori at different parts of the season,” the host of the reunion says to Emanuel at the reunion, according to a Twitter clip.

After Emanuel Neagu explained during The Challenge Season 37 reunion how he had love for both Michele Fitzgerald and Tori Deal, Michele started crying.

“I think I used him as a crutch, as somebody just to have in the house,” Michele started before tearing up. She then explained how Tori and Emanuel’s relationship no longer upsets her, as she sees their genuine connection looking back at the show.

“It doesn’t upset me that they’re together,” Michele continued. “But, he just was my person.”

“I get it,” Emanuel stated, “and I apologize for making you feel that way.”

As for where Tori and Michele stand now, it seems the two aren’t friend. “I was mad at Emanuel, but I was mad at Tori,” Michele continued. “And I really, really had a grudge against her.”

After realizing she had some misplaced anger toward Tori regarding the situation, Michele notes she rethought the scenario and no longer has “beef” with Tori.

Is Tori Deal dating Emanuel Neagu after ‘The Challenge’ Season 37?

Where do Tori Deal and Emanuel Neagu stand after The Challenge Season 37 reunion? Emanuel guest-starred in MTV’s Official Challenge podcast, and Tori revealed they still talk all the time. But it doesn’t seem serious between them. While they certainly still talk, flirt, and get along, their relationship seems light, fun, and noncommittal.

It’s clear Tori and Emanuel are on better terms than Emanuel and Michele, though. It seems Tori and Emanuel understand the nature of many Challenge relationships, whereas Michele perhaps thought Emanuel was more serious with his feelings.

It’s quite possible we’ll see Tori, Emanuel, and Michele as part of The Challenge Season 38 cast, too.