'The Challenge': Josh Martinez on Why He Became So 'Emotional' Following First Elimination Win 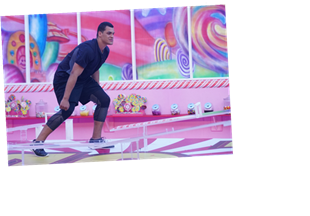 The Challenge star Josh Martinez finally won his first elimination after losing three in a row. Following the victory, the Big Brother champ became emotional. He later explained why it meant so much to him in an interview with ET Canada.

Two years after winning Big Brother 19, Miami native Josh Martinez debuted on The Challenge: War of the Worlds. After getting purged out of the competition for placing last in the first mission, the BB champ returned as a replacement.

Paired up with Are You the One? star Amanda Garcia, the two won their first challenge as a team.

However, a few weeks later, they were eliminated. Josh came back for the following season, War of the Worlds 2, and lasted far into the competition as Team USA won most of the missions, keeping him safe.

Before the finals, he went into elimination with multi-season champ Jordan Wiseley who sent him home. The BB champ returned for Total Madness and won three missions throughout the season. However, he lost an elimination, missing out on the finals again.

Josh won his first elimination during ‘The Challenge 36’

After competing in three seasons back-to-back, the 27-year-old came back for Double Agents and initially teamed up with Kam Williams. However, Kyle Christie infiltrated and stole his partner following an elimination win, leaving Josh paired with ally and friend Nany González.

He avoided getting thrown into a Hall Brawl because another player wanted the physical elimination more but wanted to earn his gold skull. Therefore, he asked then-double agents Kyle and Kam to help him out by encouraging others to select rookie Mechie Harris and Amber Martinez as the house vote, a team he deemed a layup so that he could get his ticket to the finals.

The BB champ received his wish and went against the undersized Ex on the Beach star in an elimination similar to Aneesa Ferreira and Tori Deal’s. However, the boys had to complete a puzzle first, and the balls were heavier.

Even though Josh had a massive lead on Mechie, who couldn’t figure out the puzzle, he struggled to break the panels with the ball. Therefore, the competitors and host T.J. Lavin, laughed at him, causing fans to call the elimination one of the most “awkward” performances they’ve witnessed on the show.

Josh on why he became so ‘emotional’ following his first win

Following the win, Josh spoke about how much it meant to get his first win in four seasons. He explained he got the “motivation” by thinking about his parents and how the prize money would help them.

Even though the edit depicted Josh having a hard time throwing the medicine balls for a while, he claimed the elimination only took around five minutes in an ET Canada interview.

He also explained Devin Walker trash-talked him during his performance, which is why he called him out after the win. When it came to why emotion overcame him following his victory, the BB champ explained he started doubting himself because he lost three in a row. However, Josh noted he had gotten “comfortable” in eliminations and remained calm instead of “panicking” as he previously did.

Therefore, the 27-year-old wanted to go in early on to earn his gold skull as he felt he had a good spot in the house with his BB alliance. By winning, he received a newfound “confidence” and figured he had a chance to walk away with the $500,00 grand prize as well, making him emotional. The Challenge 36 airs Wednesdays at 8/7 Central on MTV.