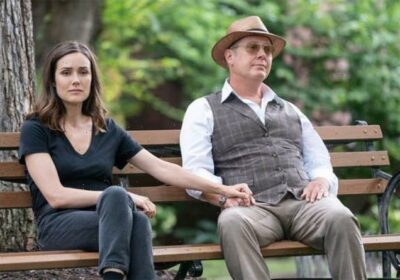 The Blacklist has teased audiences about the real identity of master criminal Red Reddington (played by James Spader) for years. After the hit NBC series aired its season eight finale, fans were left wondering if Liz Keene (Megan Boone) could return in the future to expose Red’s true identity and their relationship to one another. While the mystery of his identity still continues, a new theory has emerged suggesting that Liz could be the first to learn the truth.

In The Blacklist’s season eight penultimate episode, titled Nachalo, fans were hoping that they, and Liz, would finally receive answers about Red’s identity.

However, the mystery remains after the episode failed to provide any real answers.

The NBC series had previously revealed that Red was not who he said he was, and fans finally got the confirmation a few seasons ago that this was definitely true.

However, some fans have taken to Twitter to comment on whether or not Liz will return in the forthcoming season despite her death.

One viewer said: “It would be so good…Liz returns knowing the truth about Red.

“[She] finally has to kill him to take over his empire would be an amazing farewell to the show,” they continued.

“I mean if the blacklist has to end then red has to die and Liz has to kill him that would be classic,” they theorised.

Another fan commented: “Hope Liz will continue in next season #blacklist.”

“At least return for the final episode of the final series?” a third remarked.

Though Liz’s return would prove difficult as she died in the shocking season eight finale.

However, could the reason she returns to the show be because she has yet to learn of Red’s identity so she went into hiding to protect herself?

Liz has faked her death before to protect her family, so perhaps she did it once again.

In the season three episode, Mr Solomon, Liz’s team were distraught to find her “dead” in an ambulance after an emergency c-section was performed.

They were being hunted by Mr Solomon as she was giving birth, and a decoy ambulance was sent out to divert them.

However, Liz was found and Red blamed himself for not being able to save her in time.

With the profiler going to such extreme lengths to fake her own death, could she be doing the same thing again, especially as she is now in more danger than ever before?

It seems likely that she would go to such extremes to discover who Red really was after years of torment from the criminal who failed to tell her the truth.

In Nachalo, Liz takes a trip down memory lane as Red spills some long-held secrets and drops the bombshell that Katarina is not her real mother after all.

Fans think that Spader’s character presumably went under the knife decades ago to assume the identity of Red in order to protect Liz.

So will the former profiler return from hiding to finally expose Red’s identity? If so, could this ruin their relationship once and for all?

All eight seasons of The Blacklist are available to watch on NOW TV.