The Blacklist: Red ‘unveiled’ himself as Katarina in season 4 as fans spot hidden clue? 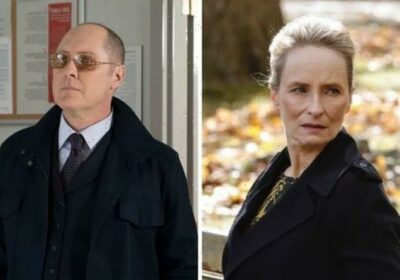 NBC’s hit thriller series may be well into season nine, however, one question remains on the mind of viewers. The Blacklist’s greatest mystery may have just been solved after a fan spotted a major clue from season four.

After Liz Keen (played by Megan Boone) met her demise in the season eight finale, the highly sought after question was left unanswered.

Before her death, Raymond ‘Red’ Reddington (James Spader) had promised to give her a letter from her mother which would’ve revealed his real identity.

In order to get the letter, Liz was instructed to kill Red to prove she was “a force to be reckoned with.”

However, she wasn’t able to pull the trigger and instead she was shot dead by Townsend’s hitman – leaving the letter completely unread.

With Red’s real identity still a mystery, fans believe they may have figured it out and exposed it on Reddit.

The user Xyaireee shared that they had been rewatching the series when they spotted the clue from the episode titled ‘Dr Adrian Shaw Conclusion.’

They explained: “When Kirk had Raymond tied up injecting drugs into him, on the last drug to kill Red he specifically said ‘There is nothing in this world you can tell me to change my mind’.

“Meaning it’s nothing Red can say to stop him from killing him, mind you this is right after they had a talk about how Katarina was.

“When Kirk leaned in to apply the dosage, Reddington grabbed him and whispered something in his ear which resulted in Kirk not killing him,”

However, this isn’t the first theory to suggest Red was actually Katarina Rostova (Lotte Verbeek), who was also Liz’s estranged mother.

One of the other major clues was from season one when Red first turned himself into the police despite being wanted as number one on the FBI’s Ten Most Wanted Fugitives.

After he was able to gain immunity he then insisted Liz was the only special agent he would work with, even though she was a rookie.

Viewers questioned this and believed Red could be Katarina as she had gone into hiding for a majority of Liz’s life and by working alongside her she could get to know her daughter.

Other fans agreed with the Reddit theory as Alexander Kirk (Ulrich Thomson), who was Liz’s biological father, didn’t question whatever Red whispered.

In response, SiameseCatTon wrote: “That’s certainly possible but why would Kirk believe his beautiful missing wife had become the man in front of him?

They added: “He didn’t even ask a question about how that could be done? He didn’t even think that’s a joke and immediately took that as a fact?”

Despite the clues, user Drop_83 debunked the theory and stated: “The topic of this scene was raised in several interviews years ago.

“There was only supposed to be a visual effect and introducing the viewer into further reflections and building another, this time ‘empty’ puzzle,” they concluded.