Home » TV & Movies » Tess Daly apologises as she snubs Shirley Ballas on Strictly: ‘How could I forget?’

Tess Daly apologises as she snubs Shirley Ballas on Strictly: ‘How could I forget?’ 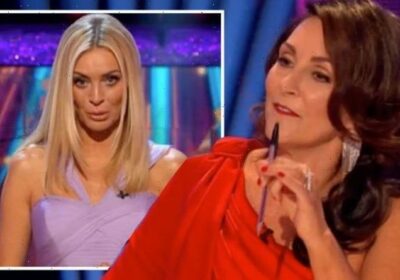 Tess Daly was on hand to host another live edition go Strictly Come Dancing and there was nowhere for the contestants to hide. BBC Breakfast’s Dan Walker learnt this lesson the hard way as he forgot some of the moves in his performance and the judges picked up on these mistakes. However, the presenter of the BBC show was ready to move the celebrity along without getting Shirley Ballas’ critique but when it was pointed out she had snubbed the head judge, she was left red-faced and had to apologise.

After Dan had heard from Anton Du Beke, Craig Revel Horwood and Motsi Mabuse, Tess ushered him to go and speak to her co-host Claudia Winkleman to get his scores.

The presenter said to the contestant: “Pick yourself up, dust yourself off and off you go to Claudia,” but she was notified of the mistake she had made.

“Oh, excuse me. How could I possibly forget?” she said before giving the floor to Shirley, who proceeded to give her comments on the performance.

When the head judge had finally spoken, Tess proceeded to give Dan the cue to leave the dance floor as she said: “Second time lucky.”

“Can I leave now?” the journalist asked the presenter, to which she said he could go and receive his scores.

According to the bookmakers, television presenter AJ Odudu is the one to beat as her first two performances have blown judges and viewers away.

Coral bookmakers have the contestant at 5/1 to take the crown, with her closest competition being EastEnders star Rose Ayling-Ellis at 3/1.

At the other end of the table, it seems actor and producer Greg Wise is going to eliminated next after actress Nina Wadia was booted out first last weekend.

His chances of leaving are high at 2/1, with rugby union player Ugo Monye coming in a close second at 3/1, meaning Oti Mabuse could lose out on securing a third consecutive win.

Coral spokesperson Harry Aitkenhead said: “Greg tops the market for who the most likely second elimination will be, the favourite to be sent packing this weekend after movie week in which he is performing as James Bond.”