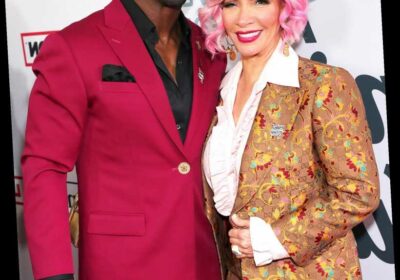 When asked who saved their marriage, Terry Crews and Rebecca King-Crews are quick to point to each other.

In their new audio memoir Stronger Together, Terry and Rebecca share in intimate detail — sometimes funny, other times heartbreaking, but always hopeful — the events that almost destroyed their relationship, and how their love survived.

"He's the hero of our story, in my opinion," Rebecca, 55, tells PEOPLE. "He made the choice to take this battle on and really become a better person." That started with the actor acknowledging having been unfaithful throughout their marriage — there was the time he kissed another woman while training with the Green Bay Packers in the early 1990s, and an incident at a massage parlor while he was filming a movie in Canada, among others.

She was right. D-Day had immediate and devastating fallout — Rebecca threatened to leave Terry, and there were times she wouldn't leave her bedroom for days. "It was like death," she says. Terry, too, says he "could not stop crying," and felt like he had lost his wife and kids — but he vowed to attend therapy, rehab, and do whatever he could to become a better man. They started writing and pitching the manuscript to different publishing houses last year and landed on Amazon's Audible to create an Audible Original audio memoir. "We're sharing very, very intimate conversations we had only in therapy and with each other [in Stronger Together]," Terry says. "It's all with the world now."

In one chapter, Rebecca shares her "rules for real relationships" that guided the couple's reconciliation, including respect, being clear about what you want out of life and a relationship, and forgiveness. "When I talk about forgiveness, I'm not advocating for stupidity," Rebecca says. "But there is a freedom and a whole new life available to you when you operate in that grace."

The couple's five kids — Naomi, Azriel, Tera, Wynfrey and Isiah — had mixed reactions to their dad's infidelity. One of their daughters told her mom she should have left him. "I don't exactly know where she stands today, and I have not broached that conversation with her again," Rebecca says. "However I do feel there's some distance between us right now."

Terry says it was important to him to be completely transparent with his kids about the issues in the marriage. "All of our kids know that they had nothing to do with anything bad that happened between me and their mom," he says. "I want to be a good role model to them, a person who is transparent and lets them be free and do whatever they need to do to [process the information.]" In Stronger Together, Terry and Rebecca also recount painful childhood experiences — for her, that includes physical and sexual abuse at the hands of a stepfather, for him, an alcoholic father, and for both, incidents of racism.

Terry discusses one shocking conversation he had with a trusted, Black guidance counselor at his high school in Flint, Michigan, during which she warned him not to befriend the white, female students he had been hanging out with at lunch. Choosing to include the anecdote was the "hardest" part of recording Stronger Together, Terry says, as he feared potential backlash.

"As a kid, I knew this was wrong," he says. "But these are some of the things that are really never said, because one thing in the [Black] culture you're always told is, it's almost like being in a family, and you don't tell family business."

He continues: "You don't tell the culture's business because no one wants to look bad. But if I can tell my own business, be it the worst things that I've ever done, I felt a little more comfortable at least to say, 'Let's all talk about some of these things that are negative that we need to just put out into the open.'"

Rebecca, who has a Black mother and a white father, dealt with her own instances of racism growing up in Gary, Indiana. She opens up about being ostracized by both Black and white students for her hair and skin color.

Terry says learning of the bullying his wife faced while they recorded the book was "eye-opening." "I can't imagine what she went through," he says. "That story gave me a whole new perspective and respect for her, like, 'Wow, that's hard, but she's still here and she's still doing her thing!'" Rebecca experienced her own revelation about her spouse when she watched Terry break down in tears in the recording booth as he described a rare, joyful moment between his parents, Patricia and Terry Sr., growing up. "I knew the story, but watching him at 50-something years old cry in the booth showed me how deeply it wounded him, that his family had been torn apart by addiction and by a lack of emotional restoration and healing," she says. "It reminded me how vulnerable my husband was."

Last year, the couple faced a new, terrifying obstacle when Rebecca was diagnosed with stage 1 breast cancer. She immediately underwent a double mastectomy and reconstructive surgery, and Terry took care of her as she recovered at home. "I have to give him his props, because he's been cooking for me, helping me bathe, and just really stepping up," Rebecca told PEOPLE in April. "I tease him all the time — I'm like, did I have to get cancer to be treated like this?!'"

Now, above all, the two are enjoying their "new marriage."

"I watched my husband transform — I have the softer, gentler, kinder Terry now," Rebecca says. "I'm thankful because our story could have gone another way, had he not decided that we were worth fighting for."

Stronger Together will be exclusively available on Audible on April 15, and is available for pre-order here.