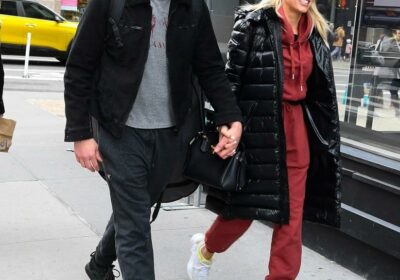 Flip or Flop star Tarek El Moussa is getting ready to head down the aisle once again. Engaged to Selling Sunset star Heather Rae Young since July 2020, El Moussa recently shared some pictures from the couple’s elaborate engagement party. Between the fancy attire and Young being decked out in white, fans began to speculate if they had already tied the knot.

The celebratory event was held in Newport Beach, CA, with Young and El Moussa’s families in attendance. The Flip or Flop star’s two children –daughter Taylor, 10, and son Brayden, 5 — from his previous marriage to Christina Haack, were also there to join in the festivities.

“No words for how perfect this night was,” El Moussa captioned the photo of himself in a tuxedo with Young by his side in a spectacular white jumpsuit. “My future wifey knows me too well… she planned out a whole cigar lounge for us, got all gluten free & vegan food/cake, got an amazing DJ so we could party all night long, and did it all right next to the marina.”

El Moussa praised his fiancé for putting everything together for their special celebration.

“MAN I am lucky (just as lucky as Bray is that he didn’t get caught having more than one cotton candy 👀😆),” he wrote. “Shoutout to @heatherraeyoung and all the people tagged who made this happen.”

While El Moussa received a flood of well wishes and praise for the photos, many of his followers wondered if his posts were actually wedding pictures.

“Is this the wedding? I’m so confused,” one fan wrote. “Beautiful wedding, congratulations,” a follower commented. “I thought you got married!” another posted.

“Does this mean you got married? Your comment future wifey is confusing,” a fan remarked. “Was this your wedding?” another asked.

The couple revealed they are now vacationing in Hawaii. Young recently shared a photo from their special night and noted that some of her followers are suspecting they may tie the knot while on the island.

“Still not over this night (!!)” Young wrote on Instagram. “but I’ve been getting tons of messages from people who think we’re getting married while we’re here in Maui (you guys call it “getting Maui’d” 😆).”

Again, fans began speculating on their marital status or if their engagement party was just a ruse.

“I have to triple check your celebration wasn’t your wedding,” one follower revealed. “You both are such an amazing power couple!”

“Yeah, maybe last weekend was the rehearsal dinner,” another commented. “The reception was the engagement party 🎊 way to flip the script,” a fan guessed.

El Moussa and Young are sure to keep their fans posted on their nuptials. The Flip or Flop host shared his excitement of heading to the altar with Young after several years of tumult in his personal life.

“My person,” he wrote of Young on Instagram. “To everyone who’s reading this know that you can find love and happiness more than once in your life. I’ve been through it — being broke, having cancer twice, getting a divorce, going through major back surgery… never give up on yourself and never give up on the idea that you can have it all.”