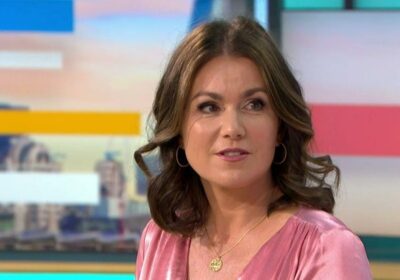 Good Morning Britain' s Susanna Reid has been left without the other half of her dynamic duo Piers Morgan for months after he left the show following his rant about Meghan Markle.

Piers' rant, which saw 57,000 Ofcom complaints submitted, ultimately cost him his gig on the show as he was told to apologise to the Duchess of Sussex but refused.

On Wednesday it was confirmed by Ofcom that Piers had not broken any rules, and as it's still not looking like he will go back to the show, Susanna confessed to feeling awkward when Piers left the show.

She appeared alongside her new co-host Be Shephard, Kevin Maguire and Andrew Piers to reveal that she was left stunned by the ruling.

Speaking about what it was like for her earlier this year, she said: "On the one hand, I've got my friend Piers Morgan and the other my bosses. It was awkward."

She added: "Ofcom included this significant freedom of speech mention… it's all over the papers today as a landmark ruling."

It was only yesterday that Ofcom stated that restricting Piers' views would be a "chilling restriction" on freedom of expression.

They said: "The code allows for individuals to express strongly held and robustly argued views, including those that are potentially harmful or highly offensive, and for broadcasters to include these in their programming."

Piers asked GMB if the ruling means he would get his job back, and ITV's director of television Kevin Lygo is reportedly trying to get him – but it's not looking positive.

Speaking to The Sun, a senior GMB source claimed: "The bosses know they need to give the show an entire refresh and will do so in the next couple of months.

"That’s not going to involve Piers though, the chances of him returning are slim to zero. Kevin is a big fan and has always said so, but he’s fighting a losing battle internally sadly."

It was also claimed that ITV accepted Piers' decision to leave the show and have "no current plans to invite him to present GMB".

Piers has joked that he will just "storm back in", after it was announced he would not be returning.