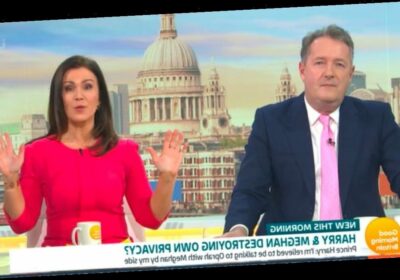 The Good Morning Britain hosts sit at opposite ends of the spectrum when it comes to the Deal or No Deal box girl turned Duchess of Sussex and her husband.

While Piers finds it difficult to say a positive word about Harry and Meghan, Susanna is more sympathetic about their struggles.

After ITV aired an exclusive clip from the duo's tell-all with US TV host Oprah Winfrey, GMB returned to the studio where Susanna was expected to kick off the segment.

However, she was left visibly shocked after Piers jumped in.

Visibly frustrated, Susanna hit out: "Hello! I am still here by the way."

Hitting back, Piers replied: "It said Piers on the prompter."

"Yes, but it said Susanna on the first thing," the feisty starlet replied.

She continued: "We are about to hear a lot from you Piers Morgan."

Harry and Meghan's sit down chat with Oprah Winfrey has been extended into a two hour special to air on March 7 on CBS in America.

It will air in the UK on ITV shortly after.

The couple sat down with the US TV legend hours after Prince Phillip, 99, was admitted to hospital in London.

In the a short teaser released by CBS, Harry says he feared Meghan would end up like his late mother Princess Diana.

He said: "My biggest concern was history repeating itself.

"For me, I'm just really relieved and happy to be sitting here, talking to you with my wife by my side."

Talking about his late mother the Princess of Wales, Harry continued: "Because I can't begin to imagine what it must have been like for her going through this process by herself all those years ago because it has been unbelievably tough for the two of us but at least we had each other."

Multiple sources have reported that The Queen was not informed by Harry or Meghan about their decision to film a major TV interview ahead of sitting down with Oprah.

Giving her take on the situation, Lorraine told Piers she thinks the move by the couple is 'bizarre'.

Lorraine said: "I don't know, I think we will watch it.

"It is like a football match with extra time.

"Maybe once they have done it then that is it.

"It's bizarre and very strange… and of course we are all talking about it."