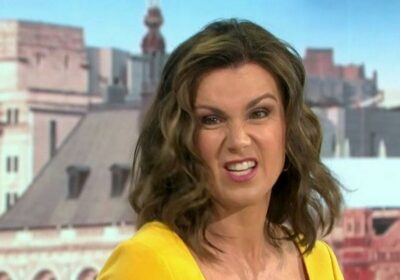 Susanna Reid was replaced by Kate Garraway on Good Morning Britain after her fiery clash with Dr Hilary Jones.

The presenter, 50, last night revealed she was cutting her usual four-day week on the show short.

Susanna's replacement comes after her fiery clash with Dr Hilary Jones this week, which saw her argue with the resident GP about the restrictions being lifted on Freedom Day.

Susanna expressed her joy for teenagers who were now able to go to nightclubs, but resident doc, Dr Hilary, took a very different stance.

"And all the doctors and scientists who understand contagious disease are saying it's too much too soon.

"So I can understand both sides of the argument – we've got rising numbers of cases.

"In every other situation, if you have a contagious disease, which infects people, makes them ill, causes long Covid in a third of people, has symptoms, causes greater hospitalisations,

"That is not the time to ease restrictions across the board, it really isn't."

Susanna replied: "Except people would say other contagious diseases don't have restrictions – when there's flu we don't shut down nightclubs."

On Wednesday's episode of the popular breakfast show, Ben Shephard was joined by Kate Garraway who usually presents on Fridays.

Susanna's fans quickly took to social media, puzzled as to why she wasn't hosting the show.

One said: "What, only two days this week? Have a lovely time whatever you're doing."

Another added: "Only two days this week? Looking forward to having you back next week."

A third said: "Myself and the GMB viewers will miss you Susanna, truly will miss you. Mornings won't be the same without you."

Some fans were overjoyed to see Kate on their screens though.

One took to Twitter to say: "Kate and Ben should be on every morning"

While another penned: "Great to have Ben and Kate back, and as early as Wednesday! #ATeam"

Susanna didn't reveal to her Instagram followers why she was having time off work, which led to rumours circling about the clash with the resident GMB GP.

Susanna is most likely preparing for the 10th National Reality TV Awards, which are taking place tomorrow.

The presenter has been nominated for Celebrity Personality of the Year 2021, with Good Morning Britain in the running for Most Inspiring TV Show 2021.