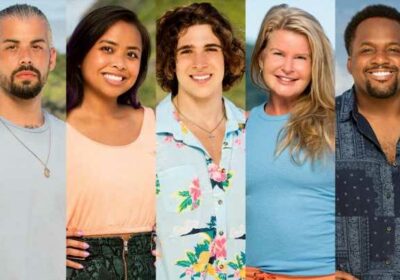 AceShowbiz -“Survivor” season 41 aired its finale on Wednesday, December 15. In the episode, five remaining players, Ricard Foye, Erika Casupanan, Xander Hastings, Deshawn Radden and Heather Aldret, competed against each other for the last time to win a million dollars.

Kicking off the episode, the tribe was forced to move to a new island. Upon arriving at their new home, Deshawn asked Erika if she wanted to have a talk, but Erika told him that she wasn’t ready. As for Deshawn, he was determined to bring Erika down to the bottom.

The two eventually talked the next morning. Deshawn said that he didn’t intend to hurt her in the previous game, but Erika didn’t think she could easily move forward from this. Later, each of them received an envelope before they were required to unscramble a phrase to find an advantage. Xander got it correct first, but it was Erika who found the advantage first. That gave her a leg up in the next immunity challenge.

In the first challenge, the players must navigate a series of obstacles which included collecting a 75-piece puzzle of the 41 logo. Erika was the first one to complete the puzzle, thanks to her advantage. She won the challenge and brought Heather with her for lunch.

During the tribal council, host Jeff Probst asked the group if Ricard was everyone’s target. Ricard admitted to having a hard time as his new baby is due in a week’s time. Eventually, Ricard was ousted.

For the last immunity challenge, the Final 4 were required to navigate a curved walkway while stalking blocks on a wobbly platform that spelled out “Final 3.” Xander won the challenge and he would decide who to bring to the final with him.

Xander was criticized for his lack of social game. Meanwhile Danny praised Erika for doing amazing in the challenges and puzzles. Later, Jeff announced Erika as the winner as she received all but one of the votes from the jury!