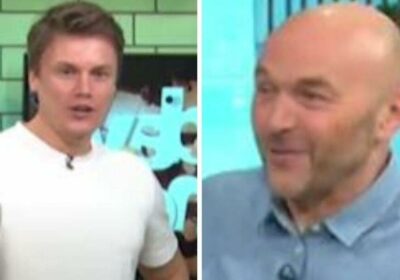 On the latest instalment of Sunday Brunch, hosts Simon Rimmer and Tim Lovejoy welcomed a series of celebrity guests and cooks onto the show. One of which included a young chef, who cooks for football stars, Jonny Marsh. Although things took an awkward turn when it was revealed he rejected a job from the Sunday Brunch presenter.

During the most recent episode of Sunday Brunch, Simon and Tim introduced Jonny Marsh to the show.

As the duo made subtle digs ahead of his appearance, Simon decided to reveal why he and his co-star were making comments about their guest.

Before he started cooking, he said: “Should we clear this up? Years ago, Jon, I offered you a job and you said no.”

Awkwardly, the guest chef replied: “I decided to go and be a head chef on a super yacht.”

Simon added: “Your choice is, you’re either a sous chef in a restaurant in Cheshire or a head chef on a super yacht?”

Viewers heard one of the guests at the table shout over to Simon and Jonny that there wasn’t much of a contest when it came to choosing between the two.

After a long pause, Simon added: “Well, we all make mistakes Jonny!

“Tell us about you then, apart from making a mistake not working for me.”

Sharing that he’s been interested in cooking since he was 18 months old as he helped his mum in the kitchen, he now cooks for professional footballers and athletes.

As he made his Thai curry, he told Simon and Tim that he got into making food for celebrities once he came back from working on the super yachts.

Although he confessed it wasn’t an easy route as he would send many emails to people in the industry until the early hours of the morning each day until one finally responded.

Knowing he works for footballers, Tim was curious to find out what team he supports as Jonny shared he’s a Manchester United fan.

However, this didn’t go down well with the Sunday Brunch host or the other guests as they all groaned when he revealed who he supports.

Defending himself, Jonny replied: “In theory, I was never a football fan, I’m from Leeds so we’re rugby!”

The guest chef then told the panel that his dad tried to get him into football as he wanted him to support Everton.

Shocked, Simon swiped: “I’m so glad you didn’t come and work for me, there’s an awful lot that will clash!”

Later on, in the show, Tim joked that Jonny rejected him and then essentially stole his business as he too used to cook for footballers.

Simon added: “At the end of the day, everyone gets one shot on the show, Tim!”

Sunday Brunch continues Sundays on Channel 4 from 9:30am.