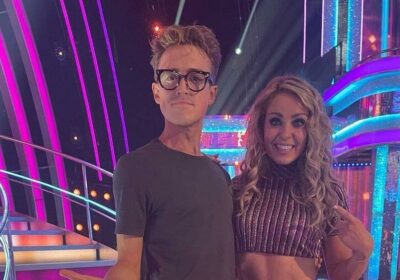 But his fans can rest assured as the 36-year-old pop star has promised to be back for week three.

Currently, he is having to isolate for 10 days, as is Amy, 31, but there are fears he may have to quit the hit BBC show if he does not fully recover.

But commenting for the first time since the drama hit, he posted under Amy’s announcement: “Rest up partner. We've got to pull something special out of the bag for week 3."

The show has been hit by an anti-vaxxing scandal after three unknown cast members – thought to be professionals – have refused to have the jab.

The trio of dancers has also threatened to quit after mounting pressure from producers to have the vaccination. However, the BBC released a statement confirming it would not be forcing anyone to have the jab in order to compete.

The statement said: "A lot has been written about vaccinations and Strictly in recent days.

"The BBC has never commented nor confirmed the vaccination status of anyone on the show. It's not our place to.

"It is not the case that concerns have been raised with the BBC or the Strictly production team from dancers or celebrities about vaccination, or that they have threatened to quit.

"We have in place strict procedures to protect those on the show and the wider production.

"Among the many measures in place on Strictly, the dancers are tested regularly to be in close contact with their partners.

"The cast, crew and everyone working on Strictly is focused on this weekend's first live show and delivering another brilliant series."

Taking to Instagram, Tom shared a photo taken of the blunt note written by Amy in her notebook which appears to give his dancing skills quite the grilling.

The feedback note, which has been underlined as if to mark it as Amy's top priority, simply reads: "Make Tom better".

Alongside the snap, Tom playfully penned: "A little glimpse into @amy_dowden's notebook… as he attached a nervous emoji and laughing face.