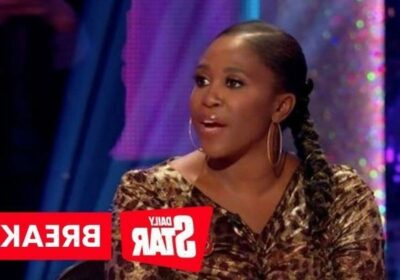 The South African-German dance expert judge announced the news on Twitter on Friday afternoon telling fans of the BBC One show that she was gutted to miss out.

Motsi confirmed she has had both her coronavirus vaccinations and the booster shot.

However, it is not administered in Germany it is not recognised by the British government.

She reassured she is OK and has tested multiple times and all results have been negative.

Motsi is not the first judge to miss a live show during the current series.

Craig Revel Horwood was forced to isolate last week after testing positive for the illness.

The sharp-tongued choreographer was replaced by award-winning actress Cynthia Erivo.

Announcing her news at the time, Tthe 34-year-old actress said: "I’m so delighted to be joining the Strictly judging panel for Musicals Week.

"Musicals have a unique place in my heart, it’s such a special way of connecting all art and making it one.

"I’m excited to bring my experience to the show and I can’t wait to see what the couples have in store this weekend."

Cynthia has just been cast in the movie adaptation of Wicked as Elphaba, so it's no surprise she secured the sought-after spot.

The talented star has also previously played a role in the UK tour of Sister Act and the Broadway tour of The Color Purple.

Despite being in its 19th series, Strictly has only asked guest judges to step in on a handful of occasions.

Donny Osmond stood in as a guest judge in the twelfth series whilst American actor Alfonso Ribiero stood in for Bruno Tonioli for the fifth week of the sixteenth series.

Anton Du Beke has also now taken a regular spot on the panel in place of Tonioli who cannot be there in person as a result of Covid-19 restrictions.

Fans will have to wait and see if anyone will stand in for Motsi on the weekend.