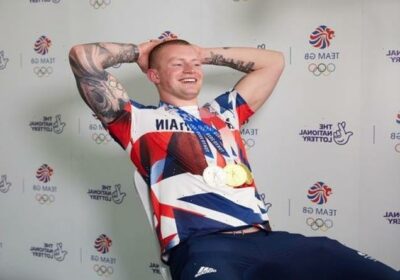 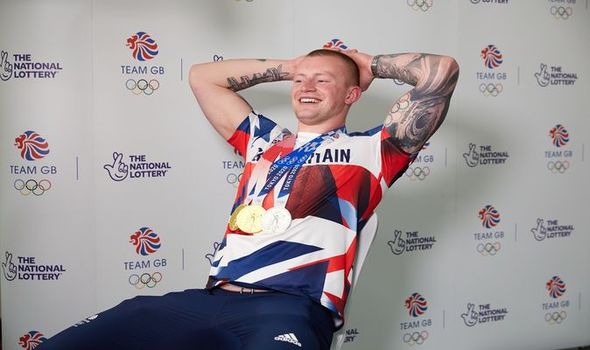 Adam, 26, who has a yearold son George-Anderson with partner Eiri Munro, says: “I’ve lost a lot of fat. I haven’t measured but I can tell in my mirror that I’m more of a curvy figure in the sense that I’m slim-lined, usually my upper body is bigger than my lower body, like a reverse triangle. Now I’m building the legs up to be strong and building the hips up too.”

But given his nickname, “peachy”, he’s quick to point out there’s one area of his body that is definitely getting bigger. He says: “My bum’s got bigger, somehow! I’ve not even been in a gym in 10 weeks and my bum is bigger!

His fans have noticed the changes too. Adam says: “Twitter’s gone mental for the bum! I’ve had tweets saying my chest should be a world heritage site and my trousers are worth the licence fee of 45p a day, that’s great value for money!

“There have been some brilliant ones! And the men…” he adds with a smile when it’s suggested he’s just got ladies lusting after him.

Despite many viewers needing a cold shower after seeing Peaty’s dance routines with pro partner Katya Jones, 32, he teases that he may cause an even bigger splash by stripping down to his swimming trunks in one show. He has already gone topless – albeit with his chest painted blue – for an Avatar dance on last Saturday’s movie night.

And he’s prepared to peel off even more layers the longer he stays in the competition.

He said: “The fewer clothes that I have on, the more comfortable I am, to be perfectly honest. In a three piece suit, I’m like, ‘Oh, it’s too hot’, but being out in trunks, it’s much easier. I feel comfortable. Very strange isn’t it? But my whole career has been me in trunks, it’s not weird to me having hardly any clothes on!” And quite a career he’s had.

Incredibly, Uttoxeter-born Adam was so afraid of water as a very young child that his mum Caroline had problems giving him a bath. He said he didn’t like water because he was sure “sharks would come and get me”. Since then he has competed in two Olympics – Rio in 2016 and Tokyo this year – and taken home five medals including three golds.

Adam has now quickly established himself as one of the favourites on Strictly, both on camera and behind the scenes, where he’s keeping spirits high on the group’s WhatsApp thanks to his love of sending cheeky pictures.

Fans logging into his social media platforms will see videos of him messing about in the training room. But swapping swimming for sequins sometimes comes with a need to ditch the joker and unleash his sexy side to win over the judges.

“That’s the easy part, to be honest,” he says. “We don’t have to work on bringing out my sexy side. We’ve got to tone that down if anything! Honestly, I struggle with the serious stuff, I just want to smile. I’m having such a good time, I’m like, ‘What am I doing?’ Last year, if you had said I’d be on this show right now, painted, half-naked, dancing in front of nine million people. No way!”

Adam says he’s inspired by the movie The Greatest Showman. And just like Hugh Jackman, who plays circus boss PT Barnum in the blockbuster, Adam says the showbiz sparkle he’s developing by taking centre stage is something he’s going to take with him when he finally dives back into the pool.

He says: “I think I’m the only person on this show that doesn’t really do any TV stuff, so that’s taken some getting used to. It’s very different for me, understanding like, ‘OK, I’ve got to be there in the studio at this time for this long.’ And then have the ability to dance on live TV, which is a new skill.

“I think it’s great for testing your charisma. I can take a lot of this learning into real life. I think sport needs to be entertaining and I can use that.”

Being a sportsman at the top of his game, it’s no surprise that people expect Adam to be insanely competitive. So, has he got his heart set on adding the Strictly glitterball to his trophy cabinet? No, I don’t think so,” he says. “The only pressure I feel is the one I put on myself to learn the dance and to not let Katya down.

“Of course it’s a competition. Of course people are here to win. Whatever. But I think that the contestants, honestly, they are all incredible this year, everyone is just so brilliant, and anyone deserves it.”

He adds: “As I’m getting through the competition, I’m just like, ‘You know what? I just want to stay in this little world of dancing and TV and just learning new dances for as long as possible.’

“I’m just enjoying it. It’s a once-in-a-lifetime opportunity. My life is competition but with this I feel like I’m nurturing my dancing soul that I was born with! I love the music and I just love dancing, I want to do it for as long as possible.”