Home » TV & Movies » Strictly leaderboard LIVE: John Whaite at the top once again as Ugo Monye at risk of exit

Strictly leaderboard LIVE: John Whaite at the top once again as Ugo Monye at risk of exit 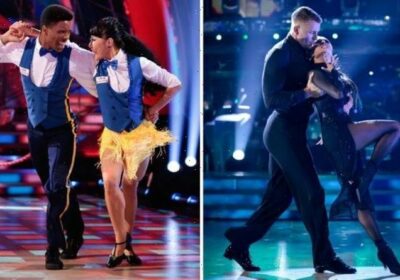 Strictly Come Dancing is heating up week on week with more celebrities scoring big with the judges. The remaining 10 out of the 11 partners gave it all once again to try and sail through to the next highlight in the Strictly calendar, Halloween week. Comedian and presenter Judi Love wasn’t able to take part this weekend as she tested positive for Covid-19 and is now self-isolating but hopefully will return next week.

What are the Strictly Come Dancing Week 5 scores?

Strictly may be worlds’ away from The Great British Bake Off but John has been riding high for weeks.

Him and Johannes have been the ones to beat, getting Shirley and fellow judge Motsi Mabuse up on their feet during Movie Week.

Last week was the first major bump in the road as the pair failed to wow the experts with their American Smooth to George Michael and Aretha Franklin’s I Knew You Were Waiting (For Me).

So the pair needed to fight back and give the Charleston to Edith Plaf’s Milord everything they got.

It was a romantic affair this week as EastEnders actress Rose took on the Viennese Waltz to Alicia Keys’ Fallin’.

Judges and the public alike have been wowed by Rose so far in the competition.

The actress is Strictly’s first-ever deaf contestant and has proved herself to be one of the best of the bunch.

They scored big back in week three with their Foxtrot being rewarded 36 but went down a little last week with their Cha Cha Cha and a score of 27.

The young chef had to put her serious face on last when doing the Paso Doble to Diablo Rojo with dance partner Nikita.

Head judge Shirley Ballas gushed at how this had been “one of the better Paso Doble’s” performed by a woman.

It was a far smoother affair this weekend as the couple Foxtrotted to Little Things by One Direction.

Presenter AJ has been consistently at the top of the pack for the majority of the competition.

She even made Strictly history when AJ received one of the best ever scores for a first performance with their electric Jive.

Week four didn’t go as well for them with the judges feeling a little deflated after their Samba to Don’t Go Yet by Camila Cabello.

AJ and Kai came back with a bang this week though with their saucy Argentine Tango to Edge of Seventeen by Stevie Nicks which Ballas described as “world-class level”.

It may have been Rhys’ turn for the Salsa last week but it was McFly frontman Tom Fletcher’s turn with dance partner Amy Dowden.

Much like Judi, Tom and Amy had to briefly take a step back from the competition when they tested positive for Covid-19.

But there was no need to worry as Tom soon bounced and have been scoring reasonably big ever since.

Rhys and Nancy are also one of this year’s favourites, bringing bundles of enthusiasm whenever they take to the floor.

The CBBC presenter has been told by Craig though to refine his moves so he can continue to progress in the competition.

Week four saw them perform the Salsa and this time around they brought Swing to the Strictly ballroom.

Rhys and Nancy did the American Smooth to I’ve Got the World On a String by Michael Bublé.

The Olympic swimmer hadn’t been doing so well since he dived into the competition.

Adam and Katya have usually been in the bottom half of the leaderboard but things changed last week with their intense Tango.

This weekend saw the couple take on the Samba to Faith by George Michael.

BBC Breakfast’s Dan Walker has been maintaining respectable scores throughout the competition so far.

The Cha Cha Cha wasn’t exactly memorable for all of the right reasons but did get a smile out of Craig Revel Horwood.

He has been hoping to climb up the leaderboard in week five, training at every opportunity possible.

Dan and Nadiya twirled their way into the hearts of the judges with their Viennese Waltz to She’s Always a Woman to Billy Joel.

Ballas commented that he was “turning into quite the dancer”.

The Dragons’ Den boss Sara wowed everyone with the Tango last week.

She and professional dancer Aljaz came top of the leaderboard after their sultry routine to Por Una Cabeza by Carlos Gardel.

They have been highly praised for how far she has come since week one.

The pair returned with their Rumba to Shania Twain’s You’re Still the One.

The former Rugby England player was nowhere to be seen last week.

He was instructed to take a short break from the show because of an ongoing back injury.

Ugo and two-time champion Oti returned for week five to show everyone what they had been missing.

The couple slowed it down for a Rumba to Leave the Door Open by Bruno Mars, Anderson .Paak and Silk Sonic.

Strictly Come Dancing: The Results will start at 7.10pm on Sunday, October 24, on BBC One.