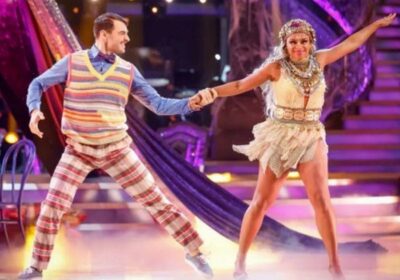 Strictly Come Dancing could face another fix row as Fleur East was allowed to re-record her dance off with Vito Coppola on Sunday 30 October, which was kept secret from viewers.

The 35 year old singer and songwriter, who recently revealed her husband watches their rehearsals, suffered a brutal fall during the first round of the dance off due to a prop blunder.

A spokesperson told OK! magazine: "After an incident with a prop at the beginning of Fleur and Vito’s dance off performance, the decision was made to halt proceedings to check they were not injured, as a matter of urgency."

Once the pair were assessed and found not to have any injuries, they were allowed to have another go at the routine.

They added: "As they had not begun to dance before the incident occurred, it was decided they could start the performance again, once it was confirmed they were fit to do so.”

Fleur and her dance partner, 30, did not have any involvement in the decision to stop the performance.

Despite this, it appears the dancing duo suffered another blunder during their second round of the dance off on Sunday evening that went unnoticed by the judging panel, which is comprised of Shirley Ballas, 62, Craig Revel Horwood, 57, Anton Du Beke, 56, and Motsi Mabuse, 41.

Good Morning Britain presenter Vick Hope and her team went through the footage to find the mishap, which showed Fleur nearly fall backwards before recovering herself and going on with the dance.

One fan took to Twitter to announce they'd seen the moment, but thought Fleur was still the right choice to save.

They shared: "noticed that slip up by Fleur when she couldn’t bounce up as she was meant to, even so she was the right person to save, although neither pair should have been in the dance off #gmb #strictly #strictlycomedancing #GoodMorningBritain".

Reflecting on his time on the show, an emotional James said: “I’ve said this from the very beginning, all I can do is go out there and do my very best.

“I am dancing against Fleur East, I went and did my best but she is phenomenal. I’ve had the best time on this show and I have a friend for life [in Amy] all I can do is thank the family, and I have a new family now.

“It’s a competition but you don’t feel like that backstage, you honestly feel like everyone has each other’s backs and everyone is just willing everyone to do their best!”