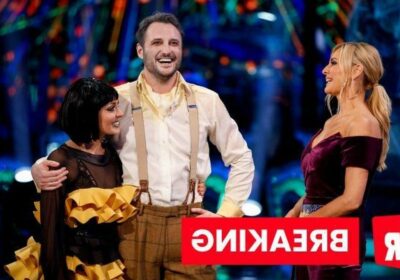 EastEnders star James Bye has admitted that he has made a “friend for life” with his Strictly Come Dancing professional partner Amy Dowden.

The actor was the fifth celebrity to be voted off the BBC competition after he went up against Fleur East.

The 38-year-old was dressed as a beekeeper and danced with Amy to Bumble Bee by LaVern Baker in an attempt to impress the panel and audience.

The Martin Fowler actor, whom he has played since 2014, even pulled out all the stops and performed a lift that he hadn’t been able to achieve before.

Despite his best efforts, Bye and Dowden received the lowest score of 27 and found themselves at the bottom of the leaderboard.

Anton critiqued his technique and scolded him for “throwing” Amy on the ground rather than “placing her down”.

He was beaten by Fleur East who took to the dance floor dressed as a fortune teller as she danced to Beyonce’s smash hit Break My Soul.

The judges decided that East had what it takes and she was saved for another week in the competition.

Judge Craig Revel-Horwood called it his “responsibility” to “save the better dancer,” while Motsi Mabuse noted that there were “different levels of dancing” seen that night.

The cast, crew and viewers were sad to see James leave but he had some grateful parting words.

Bye said: “I’ve said this from the very beginning, all I can do is go out there and do my very best. I am dancing against Fleur East, I went and did my best but she is phenomenal.

He continued: “I’ve had the best time on this show and I have a friend for life. All I can do is thank the family, and I have a new family now. It’s a competition, but you don’t feel like that backstage, you honestly feel like everyone has each other’s backs and everyone is just willing everyone to do their best!”