Stranger Things season 4: What films will influence the new series? Fans of Stranger Things are on tenterhooks over news of the renewal. Thankfully, the writers’ room has been keeping viewers updated over the process of creating the hit sci-fi show. So what could the new film influences mean for season four of Stranger Things?

What films will influence the new series of Stranger Things?

Fans of Stranger Things know that the show is constantly taking inspiration from popular culture.

Season three was full of nods to classic films with references to Back to the Future and The Princess Bride to name a few.

The next outing of the series will be no different with new films and guest appearances sure to be included.

To add to the speculation, each Friday on Twitter the writers have been posting about the films that they’ve been discussing that week.

While they will not necessarily be making their way into the show, they do offer some hints about what could be coming. 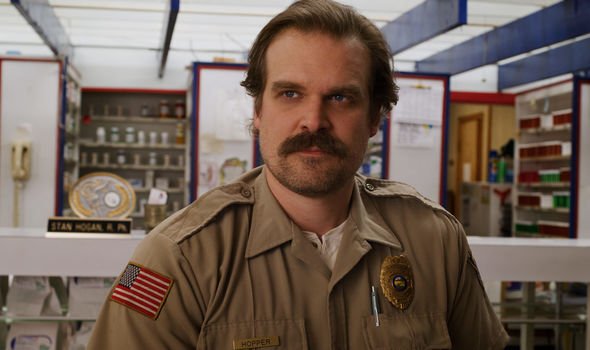 So far, the writers have posted two lists of films on their Twitter page so far.

The films discussed so far have been: 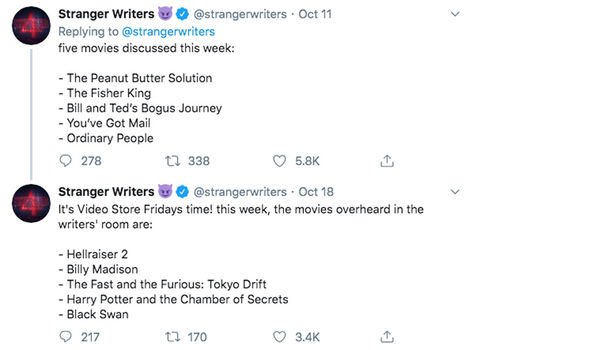 While a far-reaching list of films are clearly being thrown around in the writers’ room, some fans have been trying to guess what this could mean for season four.

One film fans have been particularly excited about the mention of Harry Potter and the Chamber of Secrets.

Posting on Reddit, following the release, user nat4580 wrote: “I thought that Harry Potter and the Chamber of Secrets is interesting.

“In the movie Ginny is influenced/possessed by Tom Riddle so that he can be reborn again. Parallels to the Mind Flayer possessing Will maybe?”

Another added on Reddit about the possible influences of the 1995 film Billy Madison, which is set mainly in a high school. 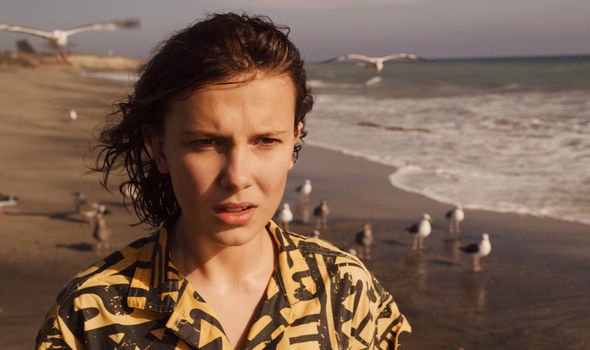 User @hayden1821 wrote: “[It] may be a stretch but since Billy Madison deals with school, maybe we’ll see Will (and possibly El) at a new school. Depends when the season takes place.”

Others have been trying to draw out information about what specific scenes in the new outing from this list of films.

User @ScatterBrainUK posted on Twitter: “Fast and Furious: we’re getting some car chase scenes? Again never seen this movie so not got much to go on.

“Maybe we’ll get some scenes in Tokyo since we’re #notinhawkinsanymore.”

Given that previous seasons of the show have also featured guest stars from hit 80s films, it’s likely that this could happen again in season four. 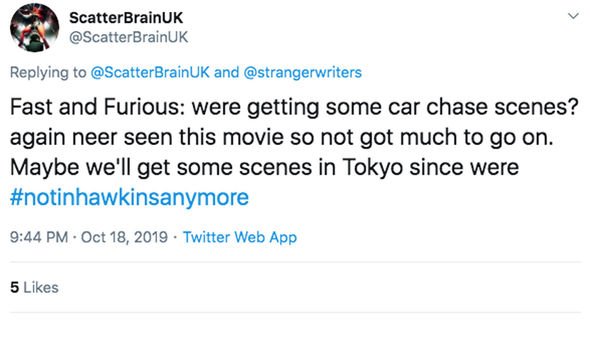 This follows the pattern set by Full Metal Jacket’s Matthew Modine as Brenner and The Goonies’ Sean Astin as Bob Newby.

Very little else has been released so far about the focus of the fourth season of the show.

However, the creators have revealed it will address the cliffhanger at the end of the third series, which hinted at an ‘American’ prisoner.

Ross Duffer told Entertainment Weekly earlier this year: “Obviously the question of who that American is in that cell and then also what they’re doing with the Demogorgon, is a tease.

“That’s obviously going to play a huge role in a potential season four.”

Stranger Things seasons 1-3 are now available to stream on Netflix.