'Stranger Things' Season 4 to Premiere in 2022: Watch the New Teaser 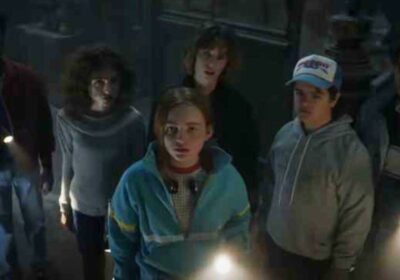 Stranger Things will be back in 2022! On Friday, Netflix released a sneak peek of the hit show’s fourth season, and announced that it’ll hit the streaming platform next year, more than two years after the third season’s 2019 debut.

The 30-second video features some footage of season 4, spliced together with memorable moments for the show’s first three seasons.

Among the new shots is one of Eleven (Millie Bobby Brown) being pulled away by men, and one of Hopper (David Harbour) holding a weapon.

The teaser also provides fans’ first glimpse at Grace Van Dien as Chrissy, a popular cheerleader with a dark secret. Dien’s character is one of several new ones that Netflix announced in June.

Amybeth McNulty, Myles Truitt and Regina Ting Chen will also join the cast as Vickie, a band nerd, Patrick, a basketball star whose life is spiraling out of control, and Ms. Kelly, a popular guidance counselor, respectively.

“Something is coming,” a voiceover says in the trailer. “It is almost here.”

The sneak peek clip follows two previous teasers for the highly anticipated fourth season. The first came in February 2020, and hinted at Hopper being alive in Russia. That was followed up by a second teaser in May, which seemed to give fans a look at Eleven’s origin story.

In April, Gaten Matarazzo, who plays Dustin on the series, told ET that he was “pretty stoked” about the show’s fourth season.

“I think the tone is definitely matured for sure, and I think they do that on purpose because I think they want their show to mature with their kids,” the actor explained of the show’s creators, Matt and Ross Duffer. “As we are growing older as people, we have to grow older as characters. They’re confronted by this issue, but they embrace it, and they use it to their advantage.”

“They don’t freak out when we get taller or when our voices drop or anything like that,” he continued. “They use it and they use it as ammunition for their writing. It’s incredible what they can do. Working with them, it’s just exceptional. Always has been.”

Earlier this month, Stranger Things‘ producer-director, Shawn Levy, told ET that fans can expect “a season that is wildly more epic than the first three.”

Likewise, actor Joe Keery, who stars as Steve on the series, told ET that the long-awaited fourth season will be “worth the wait.”

Season 4 of Stranger Things will premiere in 2022 on Netflix.