Home » TV & Movies » 'Star Wars': Hayden Christensen Reflects on His Bond with Ewan McGregor, 'I Love the Man so Much'

'Star Wars': Hayden Christensen Reflects on His Bond with Ewan McGregor, 'I Love the Man so Much' 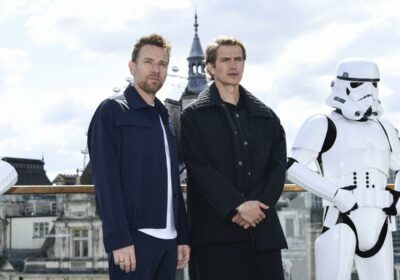 Hayden Christensen and Ewan McGregor had great chemistry as Anakin Skywalker and Obi-Wan Kenobi in the Star Wars prequels. However, it ended horribly as Obi-Wan left Anakin to die on the fiery plains of Mustafar. Don’t worry, the two actors don’t harbor a grudge against each other in the real world. In fact, Christensen says he and McGregor have remained friends since the prequels.

The main story of the prequel trilogy is Anakin’s journey to the dark side and his tragic transformation into Darth Vader. In Episode I: The Phantom Menace, Anakin as a kid is played by Jake Lloyd. In Episode II: Attack of the Clones, Christensen takes on the role and becomes the padawan of Obi-Wan Kenobi.

There are some elements of the prequels that don’t work, but one that definitely does work is the relationship between Anakin and Obi-Wan. Even though Obi-Wan is a guiding figure, the two have a charming friendship where they defend each other while still throwing snarky quips as well.

Their final battle in Episode III: Revenge of the Sith is a heartbreaking moment not only because of Anakin’s downfall but also because of the sacrifice that Obi-Wan has to make for the good of the galaxy. Obi-Wan did have the high ground, but he wasn’t happy about it.

In a recent interview with Starwars.com, Christensen reflects on his experience with the prequels. The role of Anakin was the actor’s big break and it was in one of the biggest franchises ever. Christensen said that he was the “new kid on the block” for Attack of the Clones, but he remembers Mcgregor being very welcoming instantly.

“I was the new kid on the block, and he went out of his way to make me feel welcomed and comfortable,” Christensen said. “I remember the first time we met, he gave me a big hug, and we kind of hit it off right from the get-go. I think our relationship, in a lot of ways, sort of mirrored our characters’ relationship at that point too.”

Christensen and McGregor reunited for Obi-Wan Kenobi, coming to Disney+. The two are reprising their Star Wars roles for the first time in 17 years. Christensen said that the two remained close, but they hadn’t seen each other in a while.

“We were very close and remain close,” Christensen shared. “We just hadn’t seen each other in a little while. But we got together before we started filming, just to catch up, and it was so nice to reconnect with him. I love the man so much.”

Christensen rewatched the prequels to prepare for ‘Obi-Wan Kenobi’

To prepare for his return to the franchise, Christensen said he rewatched the prequels for beginning to film for Obi-Wan Kenobi. The actor said that upon rewatch, he really admired George Lucas’ vision for it.

“Watching them again as a whole, I was really struck with the quality and depth of the storytelling and George’s vision for all of it,” Christensen explained. “It’s so nuanced, complex, and layered. Really remarkable.”

He also said that he appreciates the newfound love for the prequels that many Star Wars fans have been expressing. McGregor has also shared similar sentiments. The first two episodes of Obi-Wan Kenobi premiere on Disney+ on May 27.