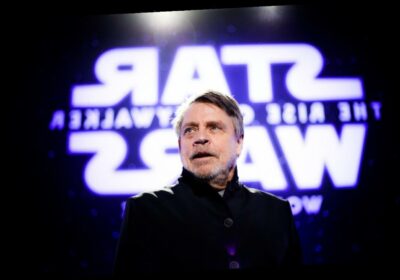 Star Wars fans haven’t enjoyed the best reputation lately. If one even says the phrase “Star Wars fans,” the word “toxic” tends to follow. That may or may not be fair, but as the saying goes, this is the way.

Fans can thank The Mandalorian for introducing a lighter tone to many of their debates, particularly after Mark Hamill’s onscreen appearance in the Season 2 finale.

What made one particular “fight” fun was that a joke Mark Hamill made flew over some casual fans’ heads.

What is the ‘Tosche’ station?

This all began when Hamill, who is famous not only for playing Luke Skywalker but for being very creative with social media, posted a photo of himself in front of a gas station that said “Tosche.” He was holding what appeared to be a power inverter. He posted the photo with the caption, “I can finally cross this off my ‘to-do’ list.”

The picture was a reference to the moment in the original 1977 Star Wars, just after Luke met C-3PO and R2-D2. His uncle Owen tells him he wants the droids cleaned up before dinner. Luke protests “But I was going to the Tosche station to pick up some power converters!”

Uncle Owen snaps back, “You can waste time with your friends when your chores are done.”

In a vacuum, the lines don’t have much impact, but Hamill’s earnest, whining delivery of the line has made that dialogue exchange a fan favorite. Some find it a cringe-worthy example of Lucas’ dialogue, which has never been the creator’s strong suit.

However, many fans now cheer the line as a reminder of when Star Wars was silly, goofy fun.

How did fans react to Mark Hamill’s joke?

One of the people who was confused was John Melendez, best known as Stuttering John from Howard Stern’s radio show. He asked “What is it?” Another fan said, “I had no clue either. Love Star Wars but not enough to know every last word that was uttered! You are not alone xx.”

This led to playful banter from Star Wars fans who were in the know. One told Melendez, “Are you serious?”

And yet the fight wasn’t all that serious. One other person remembered this wasn’t the first time the “power converters” line has been turned into a joke. The animated series Robot Chicken has a whole series of segments devoted to Star Wars, with some of the jokes being of the blink and you miss it variety.

One very short bit featured Luke finally at the Tosche station, except the power converters weren’t gear for his speeder. The “Power Converters” were a group of intergalactic strippers.

Are Star Wars fans lightening up?

The back and forth on Twitter was a refreshing change of pace to Star Wars debates, many of which had been contentious. Toxic fans were blamed for running Daisy Ridley and Kelly Marie Tran off social media. Debates over the Disney Star Wars sequels have often been filled with rancor, with some fans trying to declare the sequel trilogy non-canon.

More recently, however, fan forums have had less angst, particularly after the ecstatic reaction to the season finale of The Mandalorian, featuring a heroic Luke.

For the first time in a while, fans seemed more pleased than petulant. Disney has several new Star Wars series in the wings, including one on Obi-Wan Kenobi and one featuring a newly resurrected and triumphant Boba Fett. May the Force be with these shows if they can keep the positive vibes going.