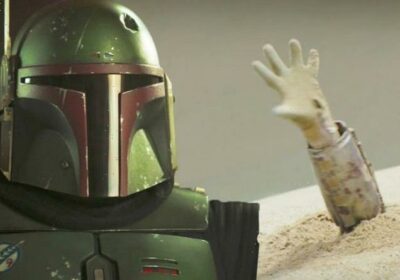 Disney Plus show The Mandalorian thrilled Star Wars fans last year when Boba Fett was reintroduced into the series for the first time canonically since Return of the Jedi. During the film’s events, Boba was launched into the mouth of the sand creature, the Sarlacc, by Han Solo. Now, he’s back with a vengeance. But has his return been a little predictable?

In April 2013 legendary sitcom Parks and Recreation aired season 5 episode 19 which involved one of the characters, Leslie Knope, being politically blocked in a filibuster.

During this, actor Patton Oswalt (playing character Garth) stood up to describe his vision for Boba Fett’s return.

The character went on to detail a scene that has now been released as the official return of the antihero.

He said: “We pan down from the twin suns of Tatooine. We are now close on the mouth of the Sarlacc pit. After a beat, the gloved Mandalorian armour gauntlet of Boba Fett grabs onto the sand outside the Sarlacc pit, and the feared bounty hunter pulls himself from the maw of the sand beast.”

Oswalt, who plays Pip the Troll in the recent Marvel movie Eternals, later revealed that this iconic moment wasn’t even scripted. He improvised the entire speech.

He said in 2020: “There was nothing in the script. All it was was: ‘Garth starts to begin to filibuster’ and they told me ‘Just do whatever you want…’

“They didn’t yell cut so I didn’t want to be unprofessional and stop, so the panic kind of locked in and I guess my response was to dump every bit of Star Wars and pop culture trivia I have in my brain. That’s like my equivalent of a squid emitting ink, I guess.”

This moment was helpfully compared to Boba Fett crawling from the sand in The Book of Boba Fett by the Lights Camera Pod podcast.

Oswalt even addressed this apparent homage to his character on Twitter, saying: “To say I’m touched is putting it lightly. And yeah, #BookofBobaFett ROCKS. YOU’RE WELCOME.”

The first episode of The Book of Boba Fett hit Disney’s streaming service last week and showed the bounty hunter struggling to get a foothold on his new empire.

And recently Boba Fett star Temuera Morrison told Express.co.uk the show will be delving into the character’s past even more.

He told us: “We’ve gotta look at the timeline, we gotta look at where [Boba] has been. We gotta keep the fans happy. Jon [Favreau] has come up with some magical formulas.”

He also revealed a handful of notable Star Wars directors who would be taking on the series to come.

The Kiwi actor emphasised how much Disney and Lucasfilm are keeping details about the series under wraps.

He said: “It’s just a new world! It’s a new world. They like to keep the Star Wars stuff under [lock and] key.”

Boba Fett will likely cross over into The Mandalorian once again after becoming good pals with Mando throughout season two.

Going forward, he could even reprise his role in the upcoming Kenobi series.

The 2022 Disney Plus series will see Ewan McGregor and Hayden Christiansen reprising their roles as Obi-Wan Kenobi and Darth Vader/Anakin Skywalker respectively.

Currently, Morrison isn’t confirmed to be joining Kenobi, but considering he is the new crime lord of Tattooine, anything is possible.

The Book of Boba Fett airs Wednesdays on Disney Plus.