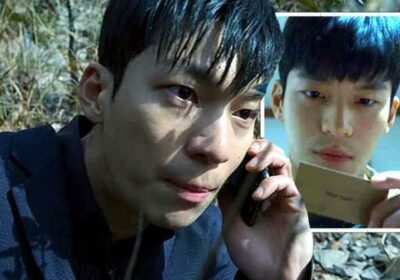 Squid Game continues to be a huge hit on Netflix and the global masterpiece includes lots of dramatic twists. Police officer Hwang Jun-ho (played by Wi Ha-joon) tried his best to shut down the barbaric games, having posed undercover as one of the workers. He was seemingly shot dead at the end of the TV series, but did he manage to save future players from certain death?

Squid Game has taken the world by storm with its unique and eye-opening concept, involving people who are overwhelmed with debt.

They are invited to participate in a number of classic children’s games, but unbeknown to them, the cost could be their lives.

After his brother went missing, police officer Hwang Jun-ho decided to go undercover to find out what happened to him.

After hearing Gi-hun (Lee Jung-jae) mention the bizarre games, he grew suspicious and posed as one of the masked workers.

He gained plenty of insight and evidence to suggest the creators of the games were manipulating the most vulnerable in society.

He tried to escape the mysterious island but The Front Man (Lee Byung-hun) and his team caught up with him.

After revealing his true identity, the officer was shocked to learn The Front Man was in fact his missing brother.

As Jun-ho had found out the truth, his own brother shot him and he was seen falling from a cliff.

Beforehand he had attempted to send photographic evidence over to his boss, but the signal was very poor.

However, fans believe a couple of the messages may have actually gone through, meaning police received some of the evidence.

Taking to Reddit, fans discussed the idea that some of the pictures reached the police base and what this could mean.

Morganebony_ said it was not impossible to believe the officer is alive as he told his colleagues where he was.

They added: “Even if they couldn’t locate him from verbal description alone, they can ping his phone.

“I assume there aren’t many cell towers in the middle of nowhere. So it’s not going to be hard to get a ping from his phone and work out what island he is talking about.

“Even if he was bleeding and floating in the water it’s not impossible to assume they rescued him.

“It’s also not impossible to assume even if he is dead they can find the phone. I don’t think they would have added the useless scenes in about the phone if they had no plans to bring them back up again.

“They focused so much on the phone, the notes on the phone and the photos and videos that it doesn’t make sense that it’s all for nothing.”

Another fan pointed out how they had spotted a clue on the phone indicating some of the photos made it through.

MrAdministration said: “If the pictures made it off the island then him being alive or dead would be irrelevant.

“If they bring him back – and yeah, I understand the whole not seeing the body thing – it wouldn’t make any sense.

“Not only did he fall off a cliff on a remote island, but the fall was from pretty high up. He got shot in the shoulder, not to mention the other injuries he might have gotten, with no first aid. He might not have access to food.

“It just wouldn’t make any logical sense, and this show so far has been pretty consistent with making sense and not going off the rails for the sake of a story.”

However, other fans have suggested the messages did not make it after all, following the time jump at the end.

Literated added: “The question to me, really, is whether some of the pics he sent actually made it off the island

“Well, there was a time skip and the games were still in action a year later, doesn’t look like his efforts achieved anything.”