Squid Game episode 8: Why is Front Man so short? 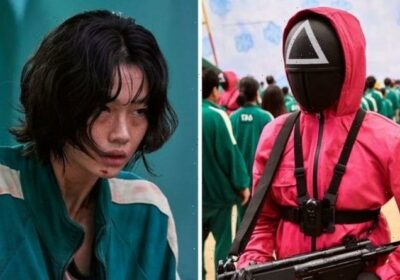 Squid Game recently dropped its full season on Netflix and the show has been the most-watched show across the globe. Completely original and unique when compared to anything else on the platform, fans have wasted no time in bingeing through the season. However, one episode is curiously shorter than the rest.

Why is episode 8 of Squid Game so short?

Squid Game has captured viewers’ imaginations with its stark visuals, and unusual story.

The series follows Seong Gi-hun (played by Jung-jae Lee), a man who struggles to pay his rent and consistently makes poor decisions with his money.

Time is running out for him, as his mother is ill, and his rent is long overdue.

Suddenly he meets a man known only as The Salesman (Gong Yoo), who offers him the opportunity to earn more money than he can dream of.

The catch is Seong, along with another 455 players, are all thrown into a series of children’s games, where the consequence of losing is far worse than going home empty-handed.

Presented more like a film, each episode is around an hour in length and introduces viewers to a variety of characters and locations.

The show covers a lot of ground, with little of the runtime wasted.

However, one episode is different, as the eighth chapter is only 30 minutes long.

It comes as a change of pace for viewers, as the penultimate episode rushed through events ahead of the finale.

Fans have been discussing the episode on Reddit, with one user on the official Squid Game forum asking why the episode is so short.

User Amberrh_ wrote: “I felt cheated out of an episode, especially with half the ending being about the old man.” (sic)

Aravis24 suggested: “Maybe the other 30 mins were supposed to be the front man’s backstory, but they decided to postpone it for season 2.” (sic)

Yet, director and writer Hwang Dong-hyuk recently sat down with Variety and admitted he currently has no plans for a sequel.

Hwang said: “I don’t have well-developed plans for Squid Game 2.

“It is quite tiring just thinking about it. But if I were to do it, I would certainly not do it alone.

While there is no official explanation why episode eight is so short, the most likely reason is that it works as a prelude to the finale.

Episode eight sets up many of the events and revelations that transpire in episode nine, with both instalments working together as one big conclusion.

As Hwang is primarily a movie director, concluding his story in one 90-minute chapter would be more familiar to him.

However, many shows have one or two episodes that are shorter in length, firstly to change the pace for viewers bingeing the show, and also because streaming series are not constrained to run times.

Squid Game is available to watch exclusively on Netflix.