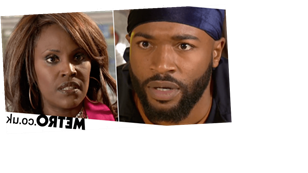 Toby has been determined to prove himself to his family, and with Walter (Trevor A Toussaint) in need of a kidney, the young man is intent on donating his.

Before doing so, one needs to attend counselling sessions — something which Toby wasn’t all that keen on doing.

He prepared for his first counselling session in tonight’s episode, but he later lashed out at the counsellor after she found a copy of The Red Door down the back of the cushion.

The book in question belonged to Felix, however, not the therapist, but Toby didn’t know that. He accused of her of taunting him, before ordering her out of the flat.

When Martine discovered what had transpired, she railed at Toby.

However, Toby berated her for interfering in his relationship with Cleo McQueen (Nadine Mulkerrin) — telling her that her decision to tell Cleo about him being a virgin was incredibly embarrassing for him.

Following the showdown, Toby walked out of the garage — and locked Martine in.

Martine was horrified, and begged her son to set her free — to no avail.

Celeste’s interests were piqued when she heard noise coming from the garage, and she subsequently demanded to know what Toby was up to.

The young man simply told her that he intends to kill Martine!

Will Toby really kill his mum?