Spoilers! Let’s talk about that monstrous surprise guest star in ‘Godzilla vs. Kong’ 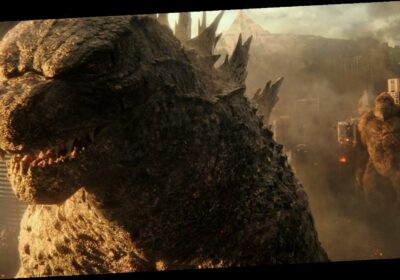 Spoiler alert: The following post reveals major plot points and the ending of “Godzilla vs. Kong,” so beware if you haven’t seen it yet.

How do you make an already epic fight night between Godzilla and King Kong that much better? Turn it into a three-way dance.

Mechagodzilla, a Terminator-esque robotic version of the iconic thunder lizard, makes his modern debut in the Warner Bros.’ MonsterVerse as the ginormous surprise guest star of “Godzilla vs. Kong” (in theaters and streaming on HBO Max now). Created by men to take on these other monstrous titans, Mechagodzilla makes for a pretty formidable foe – that is, until Godzilla and Kong form an even more fearsome tag team.

In “Godzilla vs. Kong,” the world doesn’t understand why Godzilla, who had become a protector for Earth, is attacking cities. There is a reason, though: He’s going after various places where APEX Industries – headed up by villainous CEO Walter Simmons (Demian Bichir) – is working on pieces of what later becomes Mechagodzilla.

‘Godzilla vs. Kong’: The battle you’ve been waiting for even has ‘Die Hard’ inspiration

APEX has figured out a way to create a mechanical kaiju from the severed head of defeated Godzilla foe Ghidorah (see: “Godzilla: King of the Monsters”) and create a psychic bond so a human could control Mechagodzilla. But that control becomes severed and Mechagodzilla turns out to have a mind of its own, romping and stomping through Hong Kong battling Kong, injured after a vicious fight with Godzilla.

Getting to utilize Mechagodzilla was “irresistible” for “Godzilla vs. Kong” director Adam Wingard, who calls the metal doppelgänger, which first appeared in the 1974 Japanese film “Godzilla vs. Mechagodzilla, “one of the coolest things I’d ever seen as a kid,” Wingard says.

Because the other MonsterVerse movies like 2014’s “Godzilla” and 2017’s “Kong: Skull Island” tended to be “kind of grounded” even with huge monsters, Wingard did wonder how “something so outlandish and insane” as Mechagodzilla would land.

But he says “King of Monsters” two years ago “helped tee us up” because that movie “already established that the humans could build all these insane, Illuminati-type bases everywhere so it wasn’t out of the question that we could do the same.”

In the end, Mechagodzilla is a tough matchup for both Kong and Godzilla even together, and to defeat the mechanized menace, they need help from a group of humans, led by Godzilla ally Maddie Russell (Millie Bobby Brown), who sabotage Mechagodzilla from within APEX headquarters. (Also helpful: an ax that Kong wields found during a jaunt to Hollow Earth, a primordial locale at the center of the planet that hints at the ancient history of monsters.)

For Wingard, the fact that man and monster need to work together is the ultimate thesis of “Godzilla vs. Kong.”

“Traditionally, these films are always about man vs. nature, and the extension nowadays of technology vs. nature is definitely going to be more and more real as things develop over time,” the director explains. “I always saw this movie as being an exploration of the past and the future.

“People are coming to see the monsters fight, but there’s a lot going on and we cram a lot into under two hours.”