Home » TV & Movies » Spoilers: Jenny is crushed as Johnny is sent to prison in Corrie

Spoilers: Jenny is crushed as Johnny is sent to prison in Corrie 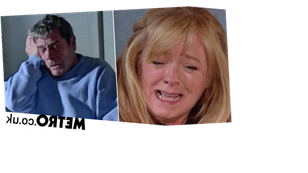 Jenny was convinced that his eyesight problems were a result of his MS, and therefore she had the nurse pop round in order to take a look at him ahead of his appearance in court.

The nurse ultimately informed them both that she deems Johnny fit enough to attend court — much to Jenny’s dismay.

Imran Habeeb (Charlie de Melo) promised to do all he could for Johnny, but warned Jenny to prepare for the worst.

The solicitor argued in court that Johnny’s remorse — not to mention the fact that he turned his life round after his criminal activity — should be taken into consideration when handing out his sentencing.

However, the judge decided that given the seriousness of the offence, a custodial sentence was necessary, and therefore he revealed that Johnny had to spend eight months in prison.

Jenny was distraught, revealing that she feared her husband wouldn’t cope in jail, but as she promised to come and visit, Johnny requested that she stay away.