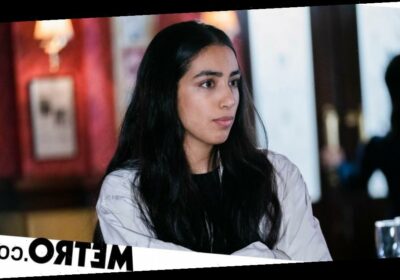 Ash Panesar’s (Gurlaine Kaur Garcha) relationship with Iqra Ahmed (Priya Davdra) in EastEnders has had its ups and downs lately, which has resulted in Ash growing closer to Peter Beale (Dayle Hudson).

The two of them have shared a drink and at a recent party hosted by Dotty (Milly Zero), Ash was pleased to hear that Peter would be attending.

There is clearly something going on between the two of them, so after a row with Iqra, could Ash be about to cheat on her with Peter?

Feeling guilty about her brother and the sacrifices he has made, Ash goes to tell her mother that Habiba (Rhukku Nahar) is pregnant with Jags’ (Amar Adatia) baby but it turns out Suki (Balvinder Sopal) is already aware and couldn’t care less, leading to the two warring.

Iqra is disgusted by Ash’s betrayal and ends their relationship. Kheerat (Jaz Deol) convinces Ash to stay with the family and with nowhere else to go, Ash is forced to return.

Later, as Ash tries her hardest not to bite at her mother’s poisonous comments, Peter arrives to take her out to cheer her up.

Could this develop into Ash cheating on Iqra?

Given Ash telling Iqra the truth about Jags, when Suki finds out, could she sabotage any potential chances Ash has with Peter?