[Spoiler] Killed Bryce Walker on '13 Reasons Why'…But It's Not That Simple. [Warning: Spoilers for 13 Reasons Why season three, ahead. Like, the biggest ones.]

You’ve come to this post for one of two reasons:

No judgments here. After an entire season narrated by a whole new player, Ani Achola (Grace Saif), we finally get to the bottom of who killed Bryce Walker (Justin Prentice) in the finale. Despite the fighting and incriminating texts, Clay Jensen (Dylan Minnette) is NOT the killer. No, no, the title goes to Alex Standall (Miles Heizer). But it’s not that simple.

Alex’s crime was not premeditated, and a series of events had to occur before Alex decided to push Bryce into those dark waters.

First, Bryce—who spends the entirety of the season attempting to become a better person (whether it was all pretend in order to gain back his status or if he really felt remorse is up to you)—asks Jessica Davis (Alisha Boe) to meet him by the pier after the homecoming game. Why would she ever agree to this? Well, he was pretty insistent. Turns out, he made her a tape (no, really) of his apology that he wanted to hand off in person. Should they have met in the light of day? Probably.

Next, Bryce had to go and intentionally break Zach Dempsey’s (Ross Butler) knee during the football game. Honestly, his motive is somewhat unclear to me. He’s mad that Zach was hanging out with his ex-girlfriend, Chloe (Anne Winters), and accompanied her to abort Bryce’s baby, sure. But at the time, he’d been hooking up with Ani and also trying to prove he’s not a piece of shit. This move doesn’t exactly work in his favor. 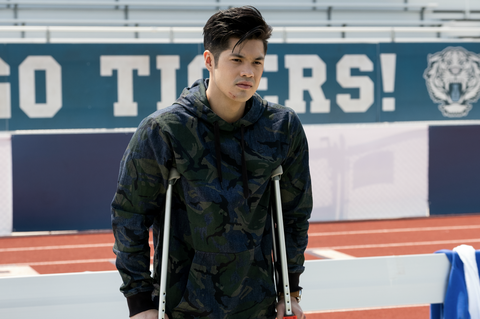 Anyways, Zach needed a football scholarship to attend college, so Bryce basically ruined his life for being a supportive friend. Righteously pissed, Zach follows Bryce to the pier (where Bryce is hoping to meet Jessica) and beats the living crap out of him.

Zach leaves before Jessica arrives, with Alex in tow (you know, because backup). When they find Bryce all bloody and unable to move, Jessica wants to leave him, but Alex attempts to help. In a cloud of pain as Alex lifts him to his feet, Bryce lashes out, threatening Zach and blaming Jessica for setting him up. Alex isn’t having it, realizing all the pain this one boy has caused all the people he loves, and pushes Bryce off the ledge.

So there you have it: Alex Standall is the culprit. However, his dad (Mark Pellegrino, who many of you may know as Lucifer on Supernatural) is a police officer, and doesn’t hesitate to help cover up his son’s crime. So instead, the blame for Bryce’s murder is placed on Monty (Timothy Granaderos), who died in prison after being arrested for sexually assaulting Tyler Down (Devin Druid).