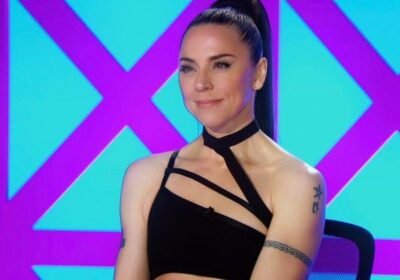 Melanie C left fans in hysterics on Tuesday night as she made her debut as a guest judge on RuPaul's Drag Race UK Vs The World.

The 48 year old joined RuPaul, Michelle Visage and Graham Norton on the judging panel as the best drag queens across the globe united to fight for the crown.

And Sporty Spice couldn't help but throw some shade at her fellow bandmates – namely Victoria Beckham and Geri Horner – as she critiqued the queens.

Speaking to Baga Chipz following her performance, Melanie said: "You are giving me lots of Spice Girls inspiration tonight. You lip sync badly."

Graham then chimed: "To her own song!," as Melanie continued: "When you were performing, I was like, there's a resemblance… Posh Spice!

"But you know what? Your vocals are much better!," she joked as the contestants burst into laughter.

When critiquing Blu Hydrangea – who performed a dance with two life sized puppets either side of her – Melanie said: "That's a way of keeping Geri in time!

"We should do that next time we go out."

Viewers rushed to Twitter to share their reaction to Melanie's jibes, with one writing: "Not Melanie C throwing shade to Victoria and Geri."

A second added: "Melanie C with the SHADIEST read. I live!," with a third writing: "Why is Mel C reading the Spice Girls like this?"

Another joked: "Melanie C comparing Baga to Victoria this is the worst f**king day of my life."

A final fan compared Melanie's appeared to Geri's lacklustre turn on the panel in 2019."

Mel C dragging Geri and Victoria is understanding the assignment, it’s what we want to see.

"Will we never forget how Geri refused to laugh at Divina’s light reading of Victoria when Geri was a guest judge on season 1… go girl, give us nothing," they penned.

For the latest updates on the Spice Girls, sign up to OK!'s daily celebrity newsletter.