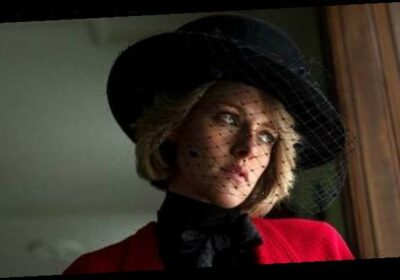 Meet your next Princess Diana. Kristen Stewart dons the iconic blonde locks and sad, doe-eyed expression of the beloved Princess of Wales, whose untimely death left a huge mark on history. And as we near the 25th anniversary of her death, we’ll receive a new biopic about the Lady Di, helmed by Jackie director Pablo Larraín. See the Spencer first look below.

In the first image from Spencer, which begun principal photography in Germany and the U.K., Stewart looks contemplative as a modestly-dressed Princess Diana, gazing out the window with a mournful expression (the kind that Stewart has made a whole career out of). But she has good reason: Spencer takes place on the fateful Christmas holiday that she spends with the royal family at the Sandringham estate in Norfolk, when she decides to end her marriage to Prince Charles.

“Spencer is a dive inside an emotional imagining of who Diana was at a pivotal turning point in her life,” Stewart said in a statement accompanying the debut of this image. “It is a physical assertion of the sum of her parts, which starts with her given name; Spencer. It is a harrowing effort for her to return to herself, as Diana strives to hold onto what the name Spencer means to her.”

Here’s the synopsis for Spencer:

December, 1991: The Prince and Princess of Wales’ marriage has long since grown cold. Though rumours of affairs and a divorce abound, peace is ordained for the Christmas festivities at Sandringham Estate. There’s eating and drinking, shooting and hunting. Diana knows the game. This year, things will be a whole lot different.

Pablo Larraín directs the script by Steven Knight (Locke), which cleverly takes a single-incident approach for the biopic — a tactic that worked out well for Larraín’s tremendous character study Jackie, which mainly took place during an interview Jackie Onassis had with a reporter, recounting the days after John F. Kennedy’s death. If Larraín’s skill for diving into the psyche of famous, but carefully manicured, public figures as he did with Jackie is still sharp — and if Stewart can deliver as impactful a performance as Natalie Portman did — Spencer may just be the film that both cements Stewart as a fantastic actor outside of indie circles, and establishes Princess Diana in the public eye as a person rather than just an icon known for her tragic death.

Juan de Dios Larraín (Jackie) is producing Spencer for Fabula Films, alongside Jonas Dornbach and Janine Jackowski (Toni Erdmann, A Fantastic Woman) for Komplizen Film and Paul Webster (Anna Karenina, Atonement) for Shoebox Films. The film is aiming for a fall 2021 debut, just ahead of the 25th anniversary of Princess Diana’s death, which is coming up in 2022.